Continue to Deadline SKIP AD
You will be redirected back to your article in seconds
Skip to main content
December 5, 2019 9:05am
1Comments 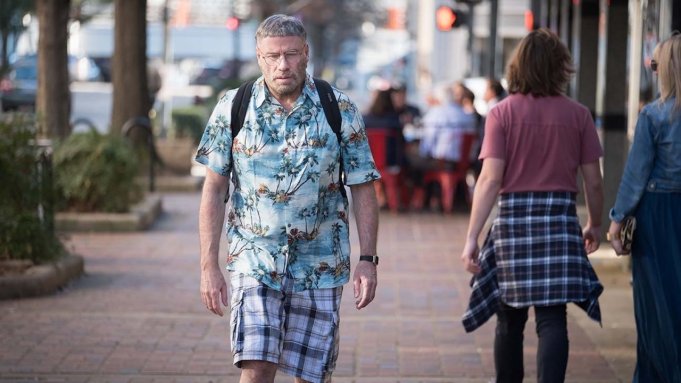 In the wake of the death of Christopher Dennis, the Hollywood Walk of Fame Superman, John Travolta’s latest movie The Fanatic takes on a greater resonance.

In the film, directed and written by Limp Bizkit frontman Fred Durst, Travolta plays Moose, a fanboy-man on the spectrum who makes his bread as a Hollywood Boulevard British Bobbie. Moose is obsessed with horror film star Hunter Dunbar played by Devon Sawa, and all he wants is the guy’s autograph. However Moose’s timing is always off in regards to scoring an autograph, to the point where he pursues Hunter right into his gated home; an eerie echo to what David Letterman weathered with his 1988 stalker Margaret Mary Ray who broke onto his Connecticut premise many times. Similar to how Letterman came toe-to-toe with his stalker, with the woman standing at his bedroom doorway, so does Moose confront Hunter.

Yet through it all, Travolta plays this on-the-spectrum guy with such nuance and sympathy, you clearly want him to win unlike Kathy Bates’ obsessed psychotic fan in her Oscar-winning role Misery.

“He’s pleading for love. All he wants is love, is unrequited love,” says Travolta about his character Moose, who he threw himself into, staying in the zone all throughout production. The ending of the pic always brought Travolta to tears given Moose’s unwavered appreciation for the cocky movie star he idolizes.

In discovering the street performer sub-culture around Hollywood Boulevard, Travolta told us at a recent Deadline screening for The Fanatic, that Durst provided him with insight. “They’re finding a way to find a living through their fantasy. Correlated to that there’s some mental and physical illness, (yet) sometimes they’re smarter than a whip.”

In addition at our screening, Travolta reflected on the banner moments of his career, i.e. how he scored his first Oscar nominated lead role of Tony Manero in Saturday Night Fever: it came from an initial failed stage audition for Jesus Christ Superstar before the pic’s producer Robert Stigwood. The Australian producer once showed Travolta his notes from that audition: “Not right for Jesus, but watch out he’s going to be a big star”.

Travolta, whose daughter is also an actress, advised to working actors “Always do your best at an audition…behave as if it’s the best role you’ve ever had and it’s the last time you’ll ever act.”

But, as we all want to know, when can we see Travolta again onscreen in a Quentin Tarantino movie, or even Brian De Palma? Tarantino’s Pulp Fiction scored Travolta his second Oscar nominated lead actor role.

The two-time Oscar nominee, Golden Globe and Emmy winner, who recently met up with Tarantino at a Musso & Frank party for his Once Upon a Time in Hollywood, provided a sage response.

“These great directors, they hire you because 90% of their job is done when they cast you. Because they believe you’re the rightest person. so you don’t ever want to force something that isn’t organic. Look how much Quentin fought for me to be in Pulp Fiction.  This guy put his reputation, his career on the line because he had that much confidence. You them their leeway, just like you want your leeway and you don’t force that hand.”

Travolta won the Lead Acting Award at the Rome Film Festival for The Fanatic. The pic is currently streaming exclusively on Prime Video.