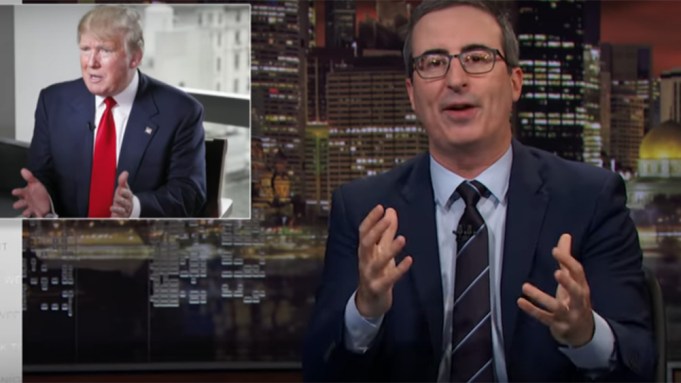 Given the many comparisons recently between Donald Trump and British Prime Minister Boris Johnson, John Oliver took some time Sunday on Last Night Tonight to explain some stark differences between the two.

“Given that Britain’s new leader is a clownish figure with silly hair and a passing relationship with the truth, you may already be thinking of the person you’re almost always thinking about anyway,” Oliver said, as an in-set photo of Trump appeared on the screen.

Johnson frames himself as “a lovable mess weathering adversity with humor and good cheer. But the truth is there may be a great deal more calculation behind that image than first appears,” Oliver argued.

“Can you imagine Trump having that level of self-reflection?” Oliver asked before slipping into Trump’s persona. Referring to one of Trump’s Twitter gaffes, Oliver, as Trump said “With covfefe the tactic was to present myself as a kind of sub-literate clown to distract you from the fact I’m a mound of skin totally stretched across the chasm where a soul should be.”

Oliver also took on Trump’s recent bragging that Johnson has become known as “Britain Trump,” suggesting that the British “like me over there,” Trump said.

Oh no they don’t, Oliver shot back. “No one ever says ‘Britain Trump,’ unless it’s in the context of a sentence like, ’I’m getting the fuck out of Britain. Trump is coming to visit this weekend.’”

Watch the entire clip above.