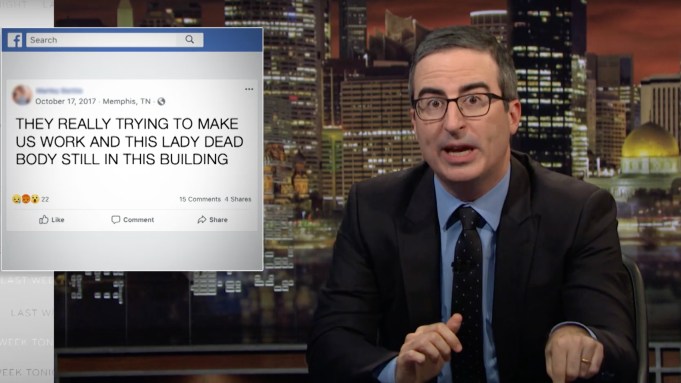 Amazon, says HBO’s John Oliver, is the Michael Jackson of shipping: “They’re the best at what they do, everybody tries to imitate them, and nobody who learns a third thing about them is happy they did.”

That third thing was the subject of Sunday’s Last Week Tonight With John Oliver, an extended look at the warehousing and shipping industry dominated by Amazon. Kicking off the segment by noting how much everyone loves to buy things online – and by how happy Amazon’s warehouse workers seem in company promotional videos – Oliver then devoted about 20 minutes to exposing the grim, exhausting work conditions behind our every overnight delivery.

“The injury and illness rate in the warehouse industry is higher than coal mining, construction and logging,” Oliver says at one point,  “I didn’t know there were jobs more dangerous than those other than maybe rodeo clown, Ooompa Loompa or or shark dentist.”

As always, Oliver finds just the right video footage to make his point: We see Walmart CEO Doug McMillon on a stage praising two workers for coming up with a seemingly small innovation that will save the company $30 million annually.

“Yeah, give these guys a warm Walmart thank you,” Oliver says, “which is of course a small round of applause, two hearty claps on the back and the request they get this sh*t off the stage and get back to work.”

Overheated warehouses, inadequate restroom allowances, exhausting tasks and the occasional bear-macing caused by can-puncturing robots – watch the segment above if you don’t believe it – all build up to a withering portrayal of Amazon’s $118 billion man Jeff Bezos, who has the perfect idea of how best to use his fortune. And it isn’t improving working conditions for his employees.

Check out the segment above.