Hollywood's Covid Protocols To Remain In Place As Negotiations Continue
Read the full story
December 25, 2019 11:42am 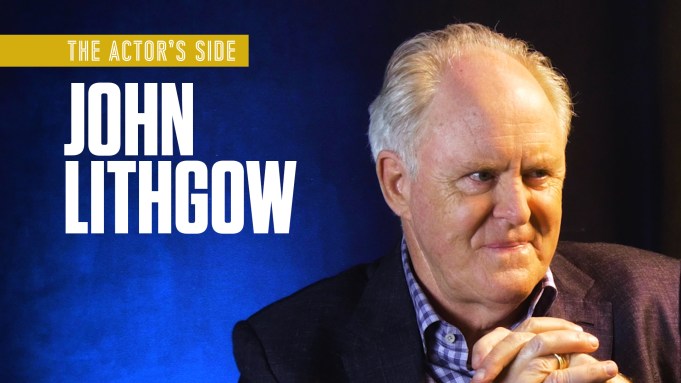 As my holiday present for you, sit down and listen to my conversation with unquestionably one of the greatest actors living: John Lithgow. He is SAG-nominated as part of the brilliant ensemble of the new film Bombshell, in which he plays Roger Ailes, the Fox News guru whose sexual harassment scandal brought him down and caused an explosion at that conservative network.

Lithgow is no stranger to awards, having won two Tonys, six Emmys, three SAG Awards and two Golden Globes. He also has earned two Oscar nominations and four Grammy noms among many other honors in his long and celebrated career that has crisscrossed through every corner of the business.

Lithgow talks about playing the villain of Bombshell, in which he co-stars with Charlize Theron, Nicole Kidman and Margot Robbie, but also how he can find the human side of monsters. In our talk at the Deadline studio for my video series The Actor’s Side, he delivers a master class, explaining the tricks of the trade and how he finds the essence of every role he plays.

He also talks about his transformation, both physically and mentally, into Ailes while revealing some very surprising things he discovered about the man. But he emphasizes that Bombshell is not the Ailes story, but rather that of the very courageous women who came forward at Fox News and brought him down even before the advent of #MeToo and the Harvey Weinstein scandal. Lithgow also says playing Ailes is part of what turned into a trilogy of real-life powerful men he played in succession on TV, Broadway and the big screen — a list including Winston Churchill on the first season of The Crown and Bill Clinton last season onstage on the Great White Way in Hillary and Bill.

We also talk about why his iconic role as Dick Solomon, an alien trying to find ways to become human in the 1996-2001 sitcom 3rd Rock From the Sun, is perhaps the character for which he is most recognized, and whether there will ever be a reboot.

But our conversation starts with the breaking news of just how close Lithgow came to playing Hannibal Lecter in The Silence of the Lambs, even meeting with director Jonathan Demme the same day it was offered to Anthony Hopkins — who, of course, went on to win the Best Actor Oscar. What Lithgow has to say about all this is priceless and just one of the highlights of this very special holiday edition of The Actor’s Side.