Continue to Deadline SKIP AD
You will be redirected back to your article in seconds
Skip to main content
November 23, 2020 12:05pm 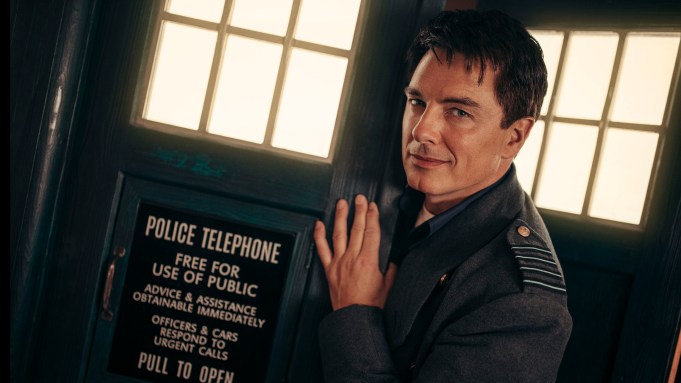 Doctor Who loves a festive special, and this year is no different, with John Barrowman reprising his role as Captain Jack Harkness.

Barrowman, as seen above, will put on his famous coat again, having featured in Season 12 episode “Fugitive of the Judoon,” where he made a brief surprise appearance with a stark warning for Yaz, Ryan and Graham to pass on to the Doctor before disappearing.

The special, Revolution of the Daleks, will air on BBC America in the U.S. and on BBC in the UK across the holiday season.

Captain Jack will be on hand to help the family as they discover a disturbing plan forming involving one of the Doctor’s most feared and dangerous enemies, the Daleks. With the Thirteenth Doctor, played by Jodie Whittaker, locked away in a space prison, will Captain Jack be able to help save Planet Earth?

Captain Jack made his first appearance in the 2005 Doctor Who episode “The Empty Child” and appeared in multiple episodes as well as in Doctor Who spinoff Torchwood, which aired from 2006-11.

This comes as the series, which is produced by BBC Studios and exec produced by Chris Chibnall and Matt Strevens, returned to filming its 13th season this month. The show was hit by the COVID-19 production shutdown in the UK and is expected to film for about 10 months with a plan to air in late 2021. The season also has been shorted to eight episodes rather than its traditional ten as a result of extra costs brought on by the pandemic.

The season will see Whittaker return as the Doctor for her third season, joining the David Tennant, Matt Smith and Peter Capaldi, who all did three seasons each.

Barrowman said: “Putting on Jack’s coat and setting foot back on the set of Doctor Who was just like going back home. It’s always thrilling to play Captain Jack. He’s a character very close to my heart who changed my life, and to know the fans love him as much as I do makes his return even sweeter. I hope everyone enjoys Jack’s heroic adventure with Thirteen.”

Said Chibnall: “A Doctor Who holiday special means treats galore, and there’s no bigger treat than the return of John Barrowman to Doctor Who for an epic and emotional feature-length episode. If anyone can blast away the sheer rubbishness of 2020, it’s Captain Jack. Daleks beware.”

Matt Strevens, Executive Producer BBC Studios, added, “After a tantalizingly brief appearance in ‘Fugitive of the Judoon,’ it’s a total joy and thrill to welcome back John as Captain Jack. One of the most iconic characters in Doctor Who lore, his presence ignites this holiday special from the start.”

Barrowman is repped by APA, and Gavin Barker Associates in the UK.