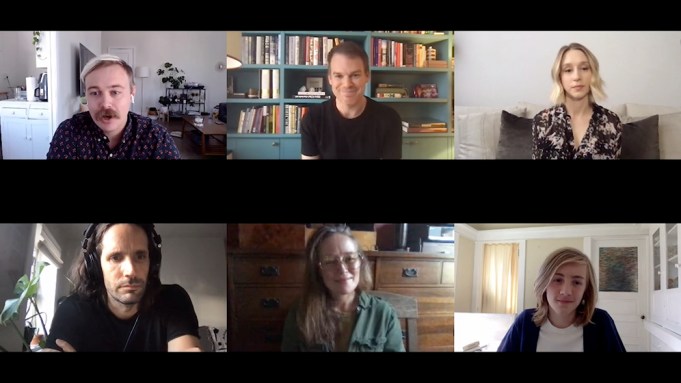 With his incredibly compelling debut feature, John and the Hole, director Pascual Sisto tells the story of John, a 13-year old boy who holds his family captive in an unfinished bunker he finds in his backyard, for reasons that are never entirely clear.

Scripted by Birdman’s Nicolás Giacobone, the film stemmed from his short story El Pozo, which he sent to the director a number of years ago. “It somehow stuck with me in a way that it had a lot of momentum,” Sisto said, while sitting down at Deadline’s virtual Sundance Studio with stars Charlie Shotwell, Taissa Farmiga, Jennifer Ehle and Michael C. Hall. “When I read it, I was really immersed in it right away.”

When the stars of John and the Hole received Giacobone’s script, they were equally compelled. “I loved that it seemed to be very un-North American, and I liked how open-ended it was,” said Ehle, who plays John’s mother, Anna. “My husband, when he finished it, said it’s like a poem, and I think that’s what moved me about it.”

For Farmiga, who plays sister Laurie, the draw of the project was its open-endedness, as well as the emotions it conjured up. “I was a bit horrified and a bit uneasy, yet I couldn’t stop thinking about John. For me, I saw this boy who was yearning for connection with his family, a boy lost in the confusion of adolescence,” she said. “I like a story about a family, especially a family that’s perfectly imperfect. It made me feel uncomfortable, so I wanted to know more, to dive deeper into that.”

And for Shotwell, the draw to the project was the chance to play John, a character of many dimensions. “He’s a very distant person, in that he doesn’t really understand how to talk with people, and when he does, he’s always a bit muted. But also, he just is not happy. He has all this stuff, but he’s just kind of lost,” the actor said. “I think what I had to do, playing John, was trying to show as little emotions as I possibly could, while also showing those emotions. So, that was obviously a pretty big challenge.”

While Shotwell spent much of the shoot on his own—with John effectively playing house, as he explores his independence—Ehle, Farmiga and Hall would spend the bulk of the shoot in very close physical proximity. Within the confines of a dirty bunker, they charted the psychological devolution of their characters, as the drive to survive cast social norms to the side.

Though Sisto crafted a set that would foster the sense of isolation experienced by John’s family members, shooting in this space actually wasn’t as physically or emotionally challenging as it would seem. “The dirt was made of coffee and cocoa. You’re there for a while and [you say], ‘I think I need another little tongueful of dirt,’” deadpanned Hall, who plays father Brad. “We would come to work and get progressively dirty, the further along we were in the story, and it got to the point where I was only comfortable when we were in the hole.”

John and the Hole premieres at Sundance today, at 3 PM PST. For more from our conversation with the director and stars of the psychological thriller, take a look at the video above.