Continue to Deadline SKIP AD
You will be redirected back to your article in seconds
Skip to main content
September 7, 2019 1:02pm 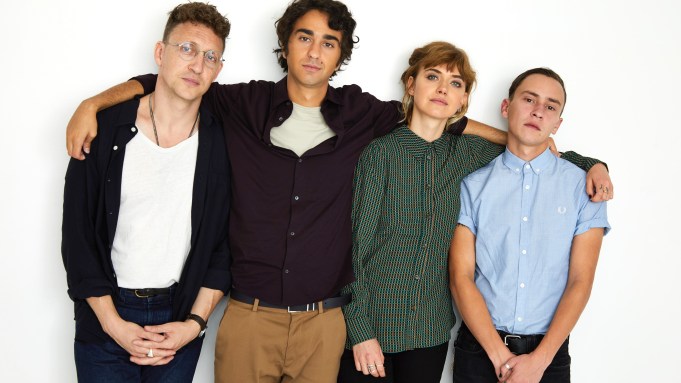 In Castle in the Ground, Joey Klein’s examination of the opoid crisis, Alex Wolff is Henry, a troubled young man facing addiction in the wake of his mother (Neve Campbell)’s death. He becomes entangled with Ana (Imogen Poots), who is battling her own opioid dependency.

For Klein, this topic felt incredibly timely. “The more I found out about it,” he said at Deadline’s TIFF studio, “and the more research I did, it just became an undeniable story.”

But the relationships also form the heart of the film. “There were elements of a mother-son relationship I wanted to explore,” Klein said. “They happened to have OxyContin and fentanyl in the apartment, because Neve’s character has Hodgkin’s lymphoma, so it was just medically true. So, there was a weird synergy of compulsions and then just personal interests that coalesced, and it became kind of undeniable, I suppose.”

Wolff dug deep for the role. “I dropped a lot of weight for the part,” he said. “To go into that world and have a character like Henry, who has a few paths he could’ve gone down that were much brighter than the path he goes down…I think if you’re just ‘playing a junkie’ or something, it’s less heartbreaking than Ana or Henry, who seem to be these two people who maybe could have been something else, and gone down a better path.”

As Ana, Poots felt the significance and weight of the tale they were telling. “I think one of the most challenging things for all of us was just to take responsibility for the subject matter and really get that accurate,” she said. “But also make it our own, in the sense of the story we’re telling about these people. It’s such a huge crisis right now, and I think we just had to be really delicate about how you go about that.”

Keir Gilchrist’s young drug dealing character had a complexity for him that allowed the role nuance and complexity.
“I think something that maybe Joey liked that I said was, ‘Deep down, he’s actually really scared, and he’s trying to help all these people, even though he’s also killing them with the drugs that he’s selling to them.’ I think that’s kind of a weird juxtaposition, and that was kind of a hard role to do, for me.”