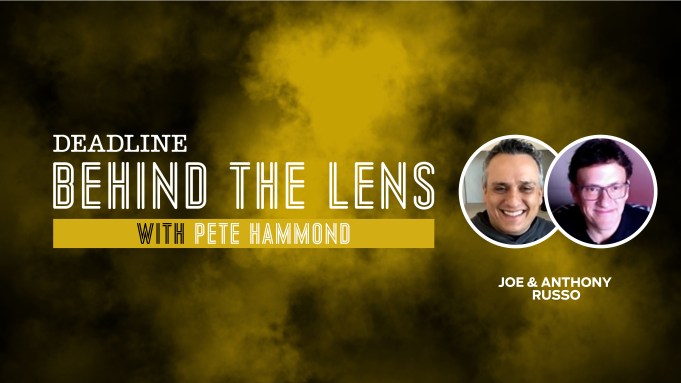 EXCLUSIVE: Joe Russo and Anthony Russo helped me launch the new season of my Deadline video series, Behind The Lens, as we give you the first-ever look at their new epic movie, Cherry and cover the waterfront on a number of different topics including the very future of movies themselves.

Coming off a spectacular run in the Marvel Universe from Captain America to the Avengers, the latter’s finale Avengers: Endgame becoming the highest grossing film of all time, the Russo Brothers go back to their indie roots with a stunning new epic drama. It deals in a very timely manner with opioid addiction, war, the power of love and much more centered on a title character played by Tom Holland on a wild journey through life as he battles his own demons in a search for meaning and purpose. Holland, in a complex role unlike anything he has done before, is sensational, and matched by Ciara Bravo as his true love in a complicated relationship that challenges both. The film is reminiscent of ambitious kinds of epic studio dramas common in the more adventurous cinema of the 70’s, and became a personal mission to bring to the screen by the Russos who financed it independently and now will unveil it February 26 in theatres and streaming on Apple. That is right at the cutoff for eligibility at the Oscars in this extended season, and this film is bound to gain attention in many possible ways including the performances of its two stars. It comes from Nico Walker’s novel, with some resemblance to the author’s own life experiences but still a fictional work. It is uniquely set in six different chapters ranging from Cherry’s own love story, to his time as a medic in the Afghanistan war, to a period of robbing banks, doing time, and most significantly becoming addicted to drugs, notably heroin in scenes that are gut-wrenchingly authentic.

On this edition of Behind the Lens, the Russos talk about why they thought this would be a timely and important movie to make now, particularly in a post 9/11 world. Having the movie world at their fingertips following the success of their MCU movies, they tell me why they wanted to go back to their indie roots with this, quoting mentor Steven Soderbergh’s philosophy of filmmaking that “you make one for me and you make one for them”. This is also deeply personal as the story is based in Cleveland where they grew up, and they know people close to them who died from addiction. They praise the work of their stars including Holland, who has worked as Spiderman is several Russo films, but is in a whole new landscape with this film. They talk about an iconic romantic epic that served as inspiration for the love story between Holland and Bravo here, and the particular challenges of a movie that is separated into six distinctly different chapters, each shot in a different style and period feel, different ratios and looks. They also discuss the variety of wildly different projects they are attracted to, from blockbusters to indies, comedy to drama, TV to movies to commercials and on and on. Nothing is off the table. They also give opinions on the future of theatrical exhibition and how the template for releasing Cherry in theatres and on Apple is a clue to the future.

AppleTV+ is unveiling the movie tonight with a special virtual screening followed by a Q&A moderated by Robert Downey Jr. We open this edition of Behind the Lens with the first look at a scene from the movie itself followed by my conversation with the Russo brothers. To watch just click on the link above.