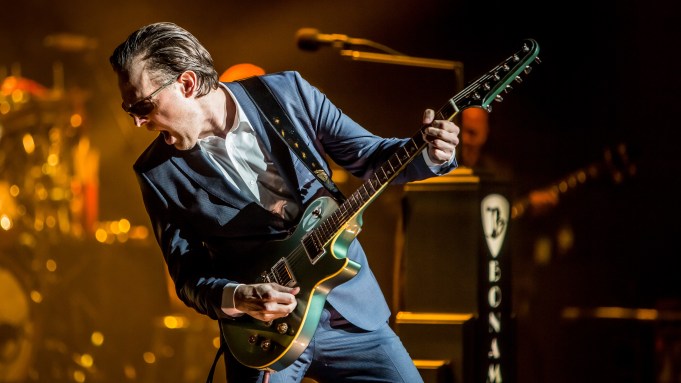 EXCLUSIVE: Paramount is releasing the feature documentary Guitar Man, about legendary bluesman Joe Bonamassa, on Premium VOD and digital on December 8. Watch the trailer above.

The docu from filmmakers Philippe Klose and Kevin Shirley follows the rise and hurdles of blues-rocker Bonamassa, who has notched more No. 1 blues albums than anyone else in history in his three-decade career. The docu shows how the two-time Grammy nominee was discovered at childhood and mentored by blues legend B.B. King, opening up for the latter when he was 12. In 2009, Bonamassa fulfilled a lifelong dream of playing at the prestigious Royal Albert Hall and was joined onstage by Eric Clapton, marking a pivotal moment that elevated his music.

Bonamassa recently achieved his 24th No. 1 album on the Billboard Blues Chart last month with Royal Tea. At 43, he has released more than 40 albums including with studio and live recordings, collaborative albums with blues sensation Beth Hart and the adventurous side projects Black Country Communion and Rock Candy Funk Party. He has played alongside such artists as Stephen Stills, Derek Trucks, Warren Haynes, Steve Winwood and Buddy Guy among others. Building on their 28-year partnership, Bonamassa and his manager, Roy Weisman, created their own record label, management, marketing and concert-promotion company, J&R Adventures, over a decade ago. He has been cited by Guitar World as “arguably the world’s biggest blues guitarist.”

Since COVID-19 has changed the ways of the world, Bonamassa has been working hard to raise money for musicians affected by the crisis, by creating Fueling Musicians. The emergency relief program is designed to support musicians by providing immediate cash payments of $1,000 for essential living expenses, as well as pre-paid gas cards of $500 to help them stay afloat and get back on the road again when it is safe. To date, they’ve raised over $365,000 and distributed money to more than 200 artists.