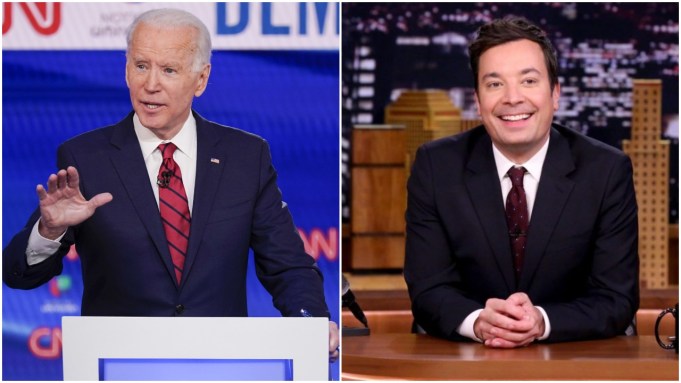 EXCLUSIVE: Joe Biden has called the first responders tending to the increasing number of coronavirus victims “courageous” and an inspiration for America during an appearance on The Tonight Show Starring Jimmy Fallon: At Home Edition.

Biden spoke to the NBC late-night host via Zoom and opened up about how the response to the global pandemic has brought the best out of most Americans.

“When I started to run for office this time around, I said, ‘We need to restore the soul of America,’ and you’re seeing the soul of America now,” the Democrat front-runner told Fallon. “The American people are incredible. It’s absolutely incredible what they’re doing. I watched one of the shows this morning between my phone calls where a doctor said how frightened he was to go in to the operating room because so many people had the virus but he said, ‘I’d watch these firemen rush into a fire, and I can [get] the courage to do it, but I tell you I’m afraid.’ That’s real courage. Real courage is doing something that you’re afraid to do and you do it anyway. That’s what so many people are doing. We’re going to get through this.”

This comes as the U.S. Centers for Disease Control said that the total number of coronavirus cases in the country has grown to 186,101, a jump of more than 22,500 for a second consecutive day and the most of any country in the world. The death toll nationally has topped 3,600.

Biden added that he’s also inspired by people doing little things to make a difference to loved ones. “I’ve got a good friend whose mom was in a nursing home and she can’t go see her and you know what she does? She goes to sit outside the window in a chair and puts her hand up and touches her hand through the glass. These things make so much difference,” he added.

The former vice president stopped by Fallon’s show, digitally, airing on Wednesday night. Other guests include a musical appearance from Marcus Mumford.

The Tonight Show Starring Jimmy Fallon launched its At Home Edition on March 17 and started airing hybrid episodes hosted by Fallon from his home, combined with best-of moments from encore episodes a day later. The show has gone back to some level of normalcy this week with guests including Jon Bon Jovi, Demi Lovato and Jonathan Van Ness with Lady Gaga speaking on April 6.