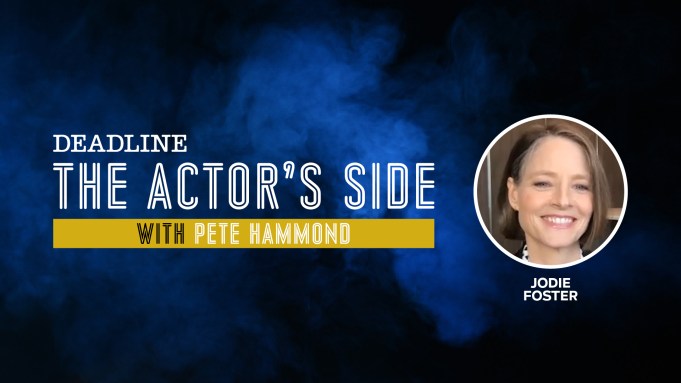 Jodie Foster is back in the awards game this season, having recently been Golden Globe-nominated for her supporting role in The Mauritanian and getting renewed Oscar buzz as well. This represents her eighth Globe nomination (she is also a past recipient of the Hollywood Foreign Press’ Cecil B. DeMille Award), the first coming in 1977 when she was just 14 for Freaky Friday, the same year she got her first Oscar nomination for Taxi Driver. She won both of her Globes and both of her Oscars for lead actress just three years apart. in 1988’s The Accused and 1991’s The Silence of the Lambs.

It has been a pretty remarkable run for the star, who also has made her mark as a director of such films as The Beaver, Money Monster, Home for the Holidays, and her first, Little Man Tate, which she tells me in this week’s episode of my Deadline video series The Actor’s Side was a benefit of having some clout after winning that first Oscar.

What is amazing is that she is also nominated for an AARP award for Mauritanian this year, and that seems crazy since Foster, born in late 1962, seems eternally young. But as she tells me she has now been working in front of the cameras for 55 years, starting in commercials at the age of 2. She is every bit the “veteran” other icons in the awards conversation this year are, like Ellen Burstyn, Glenn Close and Sophia Loren, but about three decades younger than them. The remarkable thing about her long screen career is that until this moment she has never before played a real living person, and in fact has only once played anyone from real life — but she says that was a person who lived 200 years ago, so no pressure.

In the case of her casting in The Mauritanian as Nancy Hollander, the lawyer who defends a prisoner at Guantanamo suspected of being a terrorist with ties to the 9/11 attacks on the World Trade Center, it represented a first for Foster and she was eager to jump into it, even with Hollander still very much alive to help her along the way in terms of valuable research. Nevertheless, Foster says she wanted to do it her way, and did, not going for an impression but rather the essence of this woman who defies the stereotypes of her profession. We talk about all things Mauritanian, which has just gone into release, including the streaming world in which it and so many other character-driven films are now getting exposure; Foster, while praising the moviegoing experience, also says she has no problem making movies for her phone as well.

We also discuss the value of being a child star, how it served as kind of a “film school” for her, working with top directors from Spike Lee to Martin Scorsese and what she learned, how those nearly back-to-back Oscars brought her unique opportunities, and what her goals are going forward in movies and beyond.

To watch Foster deliver the Actor’s Side of things, click on the video above.