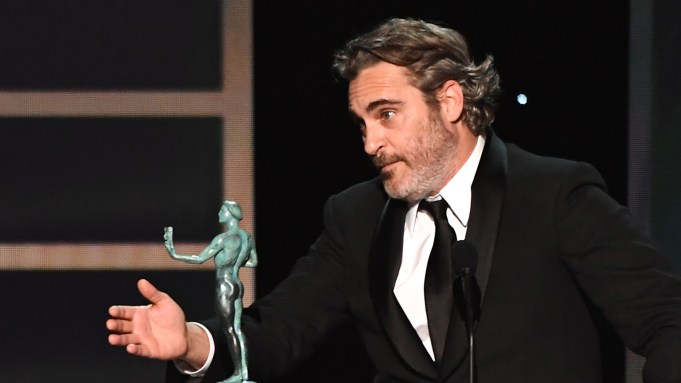 Joaquin Phoenix won his first SAG Award on Sunday for starring as Arthur Fleck in Joker, a career-defining role and a movie that have barreled through awards season. Last night, he won for Outstanding Performance by a Male Actor in a Leading Role, his first win in five tries at the actors union’s annual showcase of the year’s best performances in movies in TV.

“I was here many years ago, and I couldn’t fully appreciate it at the time. I now realize how fortunate I am to be a part of this community,” he said with onstage after his name was called. “I have such reverence for actors and what we do. I feel really honored to be here.”

Phoenix, who also has won this year at the Golden Globes and Critics’ Choice and is cemented as the Oscar Best Actor front-runner, also lauded his fellow nominees in the the loaded category, which included Leonardo DiCaprio for Once Upon a Time in Hollywood (DiCaprio’s co-star Brad Pitt won earlier in the night), Christian Bale for Ford v Ferrari, Adam Driver for Marriage Story and Taron Egerton for Rocketman.

Among the highlights: a story about how his fellow young actors “would always lose to this one kid. And no actor would say his name because it was, like, too much, but every casting director would whisper — ‘It is Leonardo. It is Leonardo.'” Phoenix also praised Bale by telling him, “You never turn in a bad performance. It is infuriating. I wish you would, one time, just suck once. It would be great, OK?”

He saved his most heartfelt moment in the speech for the end and Heath Ledger, who won the Supporting Actor SAG Award and eventually the Oscar in 2009 for playing the Joker character in The Dark Knight. Leger died of a drug overdose at age 28 just months after finishing the movie.

“Really, I am standing here on the shoulders of my favorite actor, Heath Ledger,” Phoenix said. “So thank you and good night.”