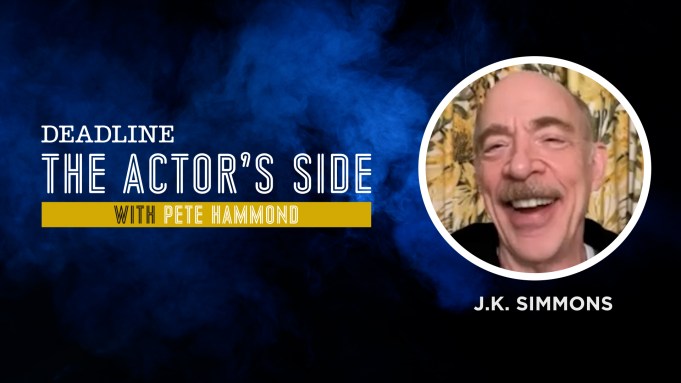 Easily one of the most versatile character actors working today, J.K. Simmons  has over an impressive 200 acting credits – and counting – when you search him out on iMDB. But as he tells me in this week’s edition of my Deadline video series, The Actor’s Side, “about 40% of them are voiceovers”.  We laugh about that but in addition to really impressive on screen performances, Simmons may be king of the voice over with numerous jobs on series like Robot Chicken  to Bojack Horsemen. He even has been voicing the yellow M&M for nearly 30 years. Viewers also know him of course as the face of Farmers Insurance in all those TV ads,  but it is his exceptional work in movies in  recent years that has really taken him to the top of the heap in his profession, and that of course includes his Oscar winning performance in Whiplash, along with films like Juno, Thank U For Smoking, La La Land, Ghostbusters Afterlife, and Palm Springs to name just a few. And did we mention his roles in a couple of iconic franchises like Batman and Spider-Man.  Simmons created the role of J.Jonah Jameson, the muckraking newspaper editor in the first three Spider-Man movies, and then reappeared in the most recent trilogy including the high flying current film Spider-Man: No Way Home.  And after resurfacing in Zack Snyder’s Justice League, he is now back as Commissioner James Gordon and currently filming Batgirl in Glasgow Scotland which is where I caught up with him this week to talk about his remarkable career, and a new highlight in his performance as William Frawley/Fred Mertz in Being The Ricardos in which he is a class A scene stealer in a killer ensemble that includes stars Nicole Kidman as Lucille Ball and Javier Bardem as Desi Arnaz. All are nominated for Oscars with Simmons receiving his second Academy Award nomination, deservedly so. We talk about what that means to him now, how he captured the essence of Bill Frawley in a very highwire and challenging role in which he plays another actor as both the man off screen and on screen. Plus we cover the waterfront of a still high flying career that covers stage, screen, television, and yes, M&Ms. To get the ‘actor’s side’ of it all from J.K. Simmons just click on the link above.

Look for more episodes of The Actor’s Side with many of this year’s Oscar nominees in the coming weeks.