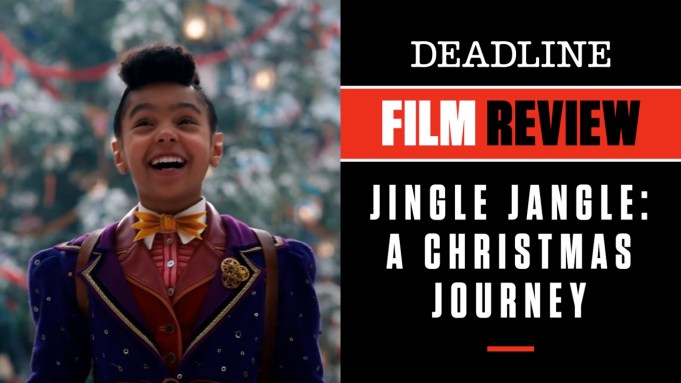 ‘Tis the season for Christmas movies. Just turn on Hallmark Channel or Lifetime any day of the week. Netflix also is in the holiday mood, and that is no more apparent than in their prime offering this year with the bright delights of Jingle Jangle: A Christmas Journey. What sets this apart from a thousand other seasonal musicals of its ilk is the majority of those singing and dancing and getting all the lines are a mostly Black cast of terrific actors. Too often Hollywood’s version of Christmas has lacked diversity, to say the least. This one from writer-director David E. Talbert rights that wrong and brings joy to the world in return.

It also happens to be an original, rather than some of the rehashed offerings we regularly get this time of year. That, in fact, is where the plot starts, with Phylicia Rashad playing a grandmother granting her cute grandkids’ wishes by reading them something new. In this case that happens to be a book called The Invention of Jeronicus Jangle. Cut to the picaresque town of Cobbleton, where uber-successful young inventor Jeronicus Jangle holds sway in his very popular toy store, Jangles and Things, and as the big production number in the street spells out he is on the cusp of his biggest invention ever. That young version of Jangle is played by Justin Cornwall as a popular and loving family man at a time where everything is going right for him, if not for his No. 2, Guftofson (Miles Barrow), who is frustrated at not getting much credit from the boss. Things begin to turn when one of the flashy new toys, Don Juan Diego (voiced nicely by Ricky Martin) has an evil streak that taps right into Guftofson creating the beginning of a rivalry that plays out for much of the rest of the movie.

‘Jingle Jangle: A Christmas Journey’ First Trailer Out From Netflix

Cut to many years later: The bottom has dropped out of Jangle’s now-closed store, his inventions have dried up, his wife died many years before, and things have gone steadily downhill. Forest Whitaker picks up the role as the older Jangle, who still has some who befriend him like Edison (Kieron L. Dyer) and the frisky Ms. Johnston (a perfect Lisa Davina Phillip), but things are pretty bleak. However, the estranged daughter he hasn’t seen in years Jessica (Anika Noni Rose) is about to change things when she decides to send her daughter Journey (newcomer Madalen Mills) for a visit with Grandpa. This little girl provides just the spark Jangle — and the movie itself, for that matter — really needs at this point. Of course, he still has to deal with the villain of the piece, Guftofson (now played by Keegan-Michael Key), who essentially has pulled the rug out from under him, “stealing” his prized invention. But, as Madalen points out, creativity is not dead — and right in their midst could be an even greater new invention to top everything else. That would be in the form of Buddy, a forgotten robot who looks remarkably like WALL-E. If he could make it fly, that would be amazing.

With a bright score from John Debney and a bevy of better-than-average Broadway-style songs from John Legend, Phillip Lawrence and Davy Nathan, there are numerous stops for big musical numbers, a couple that really stop the show. Mills knows how to belt for her age and steals the show, but everyone has a moment, and there is brief supporting work from others including Downton Abbey‘s Hugh Bonneville. The production values are first-rate, and Whitaker anchors the whole enterprise with real authority and heart. What else could you possibly ask for under the tree this year? It fits the family bill just fine.

Producers are Lyn Sisson-Talbert, David Talbert, Kristin Burr, Legend, Mike Jackson and David Mcllvain are the producers. Netflix has it in limited theatrical release now before beginning streaming on Friday. Check out my video review with scenes from the movie at the link above.

Do you plan to see Jingle Jangle: A Christmas Journey? Let us know what you think.