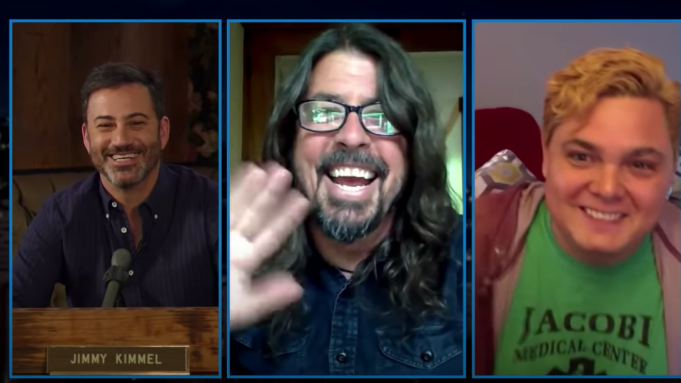 Last night’s Jimmy Kimmel Live From His House had a surprise in store for one New York nurse who has been on the frontline battling the coronavirus.

TJ Riley, who is an emergency and trauma nurse at the Jacobi Medical Center in The Bronx, was welcomed to the show via video link. Chatting to Kimmel, he revealed that he, his husband and his parents have all had the virus (and have since recovered) along with up to 60% of his co-workers.

“I would imagine that, in an emergency room in the Bronx, things are already pretty crazy,” said Kimmel. Riley replied saying that a usual day featured gun shot or machete wounds, though most of those traumas have reduced during the pandemic, meaning almost all of the hospital’s staff is focused on treating coronavirus patients.

As a special thank you, Kimmel welcomed one of Riley’s musical heroes, Dave Grohl of The Foo Fighters and Nirvana fame.

“Thank you so much for everything you’ve done for so many people,” said Grohl. “It’s much appreciated. And Jimmy, thanks for honouring such brilliant people for doing the right thing.”

The pair also revealed that they were giving the nurse $10,000 via one of the show’s clothing sponsors. You can watch the full clip above.

New York has been hit hard by the virus. At the time of writing, the state has seen nearly 300,000 confirmed cases and more than 22,000 deaths.