Continue to Deadline SKIP AD
You will be redirected back to your article in seconds
Skip to main content
June 28, 2019 1:39pm 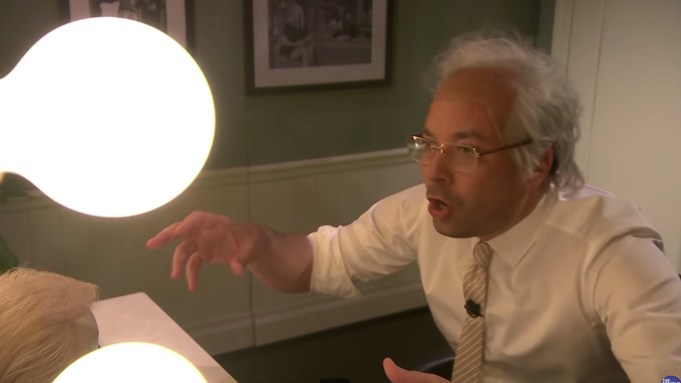 Sitting at a backstage make-up table, Fallon channels Beto O’Rourke, Bernie Sanders and Donald Trump (with the help of appropriate wigs) to perform the Swiftian satire. “I can’t calm down,” his hand-waving Beto sings (though truth be told, that joke seems a bit dated – O’Rourke has seriously toned down the arm flailing of late).

As Sanders, Fallon croaks, “They say I’m too loud but I’m upset about college debt,” while his Trump manages to get in references to “Sleepy Joe” and “loaded and cocked.”

Since hitting YouTube last night, Fallon’s parody has scored nearly 42,000 views. Not bad, but a long way to go before coming close to the 61 million racked up by Swift since the debut of her cameo-packed Pride anthem on June 17. With it’s pro-gay, anti-hate message, “You Need To Calm Down” includes appearances by, among others, Laverne Cox, Jesse Tyler Ferguson, Queer Eye’s Fab Five, figure skater Adam Rippon, singer Adam Lambert, Ellen DeGeneres, Billy Porter, RuPaul, Katy Perry and Ryan Reynolds.

Check out Fallon’s parody version above.