Continue to Deadline SKIP AD
You will be redirected back to your article in seconds
Skip to main content
August 18, 2020 2:32pm
9Comments 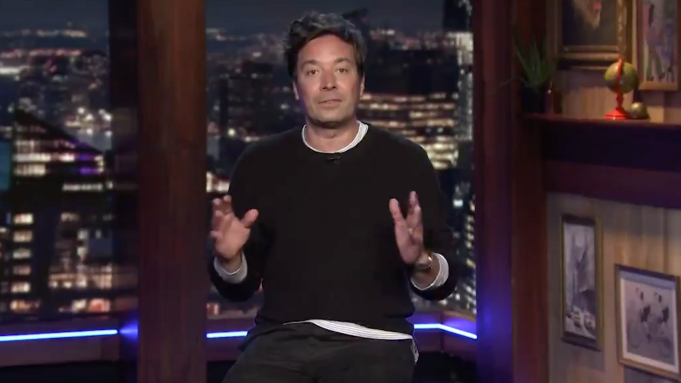 Jimmy Fallon responded to HBO Max’s addition of proper social notices with a film intro of his own.

On Monday’s episode of The Tonight Show, Fallon dressed up as Cherished Cinema Classic (spoof of TCM) host Clyde Darwell to introduce Passion on the Prairie, a fake 1940s Hollywood film. Much like Jacqueline Stewart in the newly-added HBO Max disclaimers, Fallon’s Darwell went on to inform audiences the the supposed 1946 film was a “product of its time.”

“By today’s standards, it contains outdated and insensitive portrayals of African Americans,” he said. “ But keeping that in mind we hope you can look past those flaws and enjoy this American classic, which I should also note is offensive to Native Americans, Asian Americans, Lebanese American, the Inuit and Estonian Americans.”

Before starting the fictional film, Fallon also noted how the love scenes weren’t exactly consensual or all that kind to women. With those issues, he started the film’s opening sequence – only to interrupt it with yet another bit of proper social context.

Fallon gave his make-believe viewers a trigger warning about the film’s graphic whale hunt and other instances of animal abuse. He also noted how the film may be “super sympathetic to Nazis” and how characters did not abide each others’ preferred pronouns.

“You know what? Let cut out the problematic scenes and show only the parts of the movie that aren’t offensive now,” he said after he realized the pointlessness of listing possible triggers and offensive content.

Finally, the film began rolling. Instead of a cohesive narrative, the film featured only footage of Western frontier imagery spliced together with the film’s “The End” card.

“Wow, they don’t make them like that anymore,” Fallon said.

The spoof comes after HBO Max included proper social context notices for Gone with the Wind and Blazing Saddles. HBO Max put the disclaimer in place following complaints of the “ethnic and racial prejudices” depicted in Gone with The Wind.