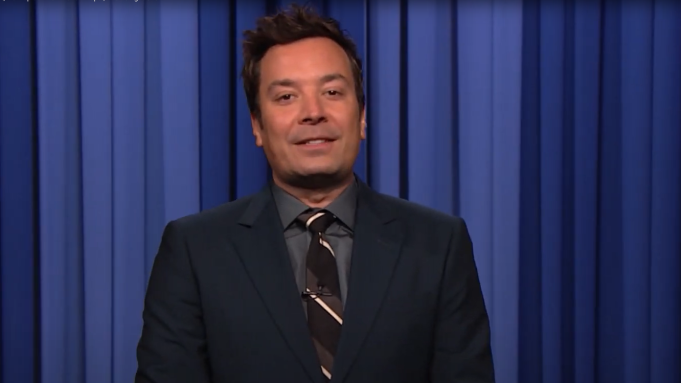 On Tuesday’s episode of The Tonight Show, Jimmy Fallon touched on the new Spider-Man trailer and more.

“Today, the U.S. intelligence agencies finished their review on the origins of Covid-19,” he said, in kicking things off. “Then, Americans said, ‘Hold that thought. There’s a new Spider-Man trailer, y’all.'”

The late-night host noted that Sony debuted the official teaser for Spider-Man: No Way Home at Cinemacon, after a version of the trailer leaked online. “It already has over 200 million views. Yep, fans are going nuts,” he observed. “People haven’t been this excited about a kid who lives with his aunt since The Fresh Prince of Bel-Air.”

In the trailer, he joked, “Spider-Man visits Doctor Strange and asks him to turn back time. Then, President Biden shows up and asks for the same thing.”

Fallon then turned to other film news, with regard to Netflix, which recently announced the release dates for 42 movies—all of which will hit the platform by the end of this year.

“Even the Hallmark Channel was like, ‘Maybe you should slow down a bit. Quality over quantity,'” he joked. “42 new movies. When they heard that, Disney+ said, ‘Crap, get some Avengers in front of a green screen, now.'”

The host noted that some of these Netflix titles, including Boy Called Christmas and A Castle for Christmas, are holiday movies.

“They were like, ‘Okay, Starbucks,'” he joked. “‘We see your pumpkin spice latte and raise you Single All the Way.'”

Fallon subsequently returned to the report on the origins of Covid mentioned at top, noting that an unclassified version will soon be released to the public. “Like everything with this pandemic, I’m sure Americans will fully accept the truth and it will put all conspiracy theories to rest,” he deadpanned. “Yep, the unclassified report will come out in a few days—or sooner, if Sony accidentally leaks it early.”