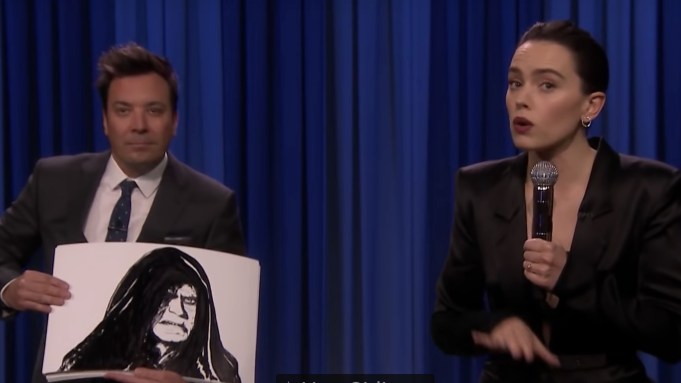 Anyone looking for a refresher on the entire Star Wars saga needn’t devote the four-day Thanksgiving weekend to the endeavor: Daisy Ridley rapped the history on last night’s The Tonight Show Starring Jimmy Fallon.

And if you don’t even have the patience for an eight-episode faux-rap recap, here are the lyrics, courtesy Tonight‘s YouTube page:

Said a long time ago in a galaxy far far away a
Guy named Vader tried to kidnap a Rebel Princess Leia
So she employed a droid to record her a quick note, she said
“Help me Obi-Wan Kenobi, you’re my only hope.” Go!

Hyperspace zoom, sent off some battle plans in an R2
C-3PO’s saying they’re doomed, until they’re bought by a farmer named Luke
His Force is strong
Obi-Wan hasn’t heard that name in long
Solo shoots first, don’t say that I’m wrong
It took him twelve parsecs for his Kessel Run

Well, sure. Chewie was charting the course
Luke learned the way of the Force
Blew up the Death Star, he had no remorse
He got a medal, he’s ready for more

Strike back, Rebels on Hoth are attacked
Yoda shows up and talks backwards
Battled with Boba Fett, put up a fight but then Han got froze in carbonite, burr
Wasn’t the plan, suddenly Luke is in need of a hand
Lando Calrissian led them to slaughter
And Darth Vader said to Luke
I am your father

What?! Jabba the Hutt, gotta admit that bikini was hot
Yoda is dying, yes that’s why I’m crying
Take this any longer I simply cannot
Hey Sidious
You were quite hideous
Vader protected his kid, I’m not kidding, I’m serious
Blew up a Death Star, ‘cause it was a trap
Shout out to Ewoks, ‘cause they had our back

Attack of the clones
Ten years pass, Anakin’s grown
He falls in love but his master is captured
His mother is killed and then that spells disaster
Oo!
Mace Windu
Anakin loses an arm to Dooku
Secret marriage
Twins in the carriage
Palpatine’s savage
And Vader breaks through!

Now to today
Jumping ahead to a scrapper named Rey (Hey!)
Teamed up with Poe and a Stormtrooper Finn
Who betrayed the First Order, so we let him in
BB-8!
Solo vs. Solo, Han met his fate
Rose got to work
Kylo won’t put on a shirt
Kylo is kind of a flirt
Tracked down Luke he was giving me hate
Until he saved the Resistance on Crait

You can’t stop me, I’m a Jedi from Jakku
Fight the Dark Side from Tatooine to Naboo
Let go of everything that you fear to lose
Be the spark the lights the fire and May The Force Be With You