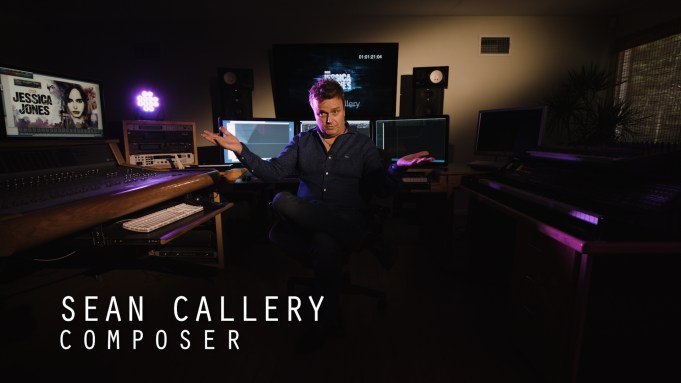 A four-time Emmy-winning composer lauded for his work on series including Homeland and Elementary, Sean Callery remembers his first encounter with Marvel’s Jessica Jones. Examining a printed image of the hard-living superhero-turned-detective, with a drink and a cigarette in hand, the composer had a strong sense of who this complex character was, and how that could inform one of the Marvel Television Universe’s most compelling scores.

The latest guest of Deadline’s Production Value video series, Callery invited us into his studio to discuss the genesis of his work on Jessica Jones, as well as his roots in music. Setting out to score the acclaimed Marvel series, Callery saw a number of interesting attributes in the series’ protagonist. “She’s playful, and she’s got wit, and she’s a smart aleck, and she climbs down fire escapes, and she’s a shadow,” the composer said.

All of these impressions led, in Callery’s mind, to one lasting image that would continually inform his work: that of an alley cat. “I thought of a clever animal. The cats I had as a kid, they were always sort of in control of the room—as opposed to dogs, who were just all over the place,” he said.

Making money as a jazz pianist in East Coast nightclubs and restaurants throughout his college years, Callery developed an affection for an intimate jazz sound, and saw potential in introducing this genre of music to Jones’ world—a world oozing with the energy of classic film noir.

“There was something very intimate, and each voice was going to be very specific. If it was a guitar or a piano or an upright bass, it had to be very personal,” he explained. “I was very excited about the possibility of doing a score like that because one, I hadn’t done it, and two, I don’t remember a whole lot of scores that had what we were calling a ‘neo-noir experiment.'”

Well-versed in the Marvel world at this point after working on both Jessica Jones and ABC’s Inhumans, Callery was quick to note the positive creative aspects of working within the Marvel Universe, and what makes the experience so unique. “What I liked about Marvel is they were very specific about knowing their character, and they had a wonderful specificity, but not so much that you felt constricted,” he said. “They wanted me to experiment and find the sound for [Jessica Jones], and I was really grateful for that.”

In Season 2 of Jessica Jones, Callery was creatively nourished by a season about women, centering on the relationship between Jessica (Krysten Ritter) and her mother (Janet McTeer), in all its complexity, richness and nuance. “Sometimes there’s a lot of tension between them, almost adversarial, and you had to find a way to convey [that] they love each other, but there’s friction,” Callery said. “It sometimes happens through a sound designed element that sort of is interwoven with organic elements. It’s a bit of sculpting, and you don’t really know you have it until you hear it and it emotionally feeds back.”

In his continuing work as a composer, Callery remains fulfilled by what he finds in his explorations of the unknown. “It’s intimidating sometimes, and sometimes very emotionally draining. But it can be very, very rewarding, and it can only be practiced,” he said. “If I ever felt I mastered it, I think this would be my last interview.”

Winning his most recent Emmy for Jessica Jones‘ main title theme, Callery received his first nomination for the series’ score this year.