Continue to Deadline SKIP AD
You will be redirected back to your article in seconds
Skip to main content
June 17, 2020 2:40pm 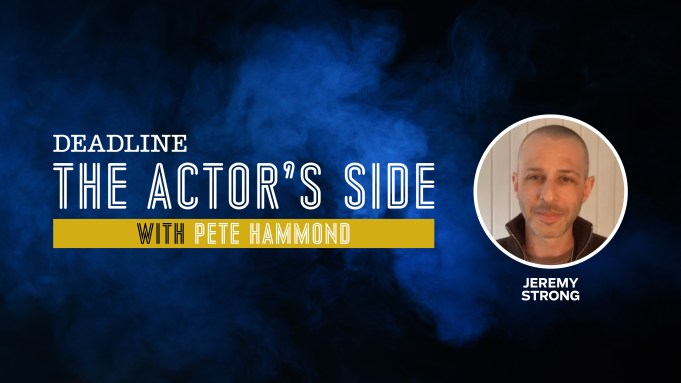 With shooting still not resumed on the third season of HBO’s water-cooler hit drama series Succession, Jeremy Strong, who plays high-wired son Kendall Roy, has been sheltering in a small village in Denmark with his Danish wife and family during the coronavirus pandemic. That is where I caught up with him recently for today’s episode of my Deadline video series The Actor’s Side.

Strong, in a killer cast which also includes Brian Cox, is a standout as Cox’s  Logan Roy’s second oldest son and a prime candidate to take over the global media company when his father retires. Of course there is a lot of behind-the-scenes machinations to overcome before that can ever happen, as has been shown in the series’ first two seasons. Strong already has taken the Lead Actor Drama Series Critics’ Choice Award for his role, and there is lots of Emmy buzz as you might imagine for a show and a character that has captured the zeitgeist.

Strong describes the series as “King Lear meets the media industrial complex” and says Kendall is the kind of challenge he looks for, saying the role is like summiting on Mt. Everest.  He puts his all into every moment, saying he is doing it like a blood sacrifice for the audience. It takes everything out of him, but it certainly is paying off. We talk about his approach to the role as well as how he got it in the first place after connecting with creator Adam McKay. He also explains how the whole tone of it changed after a table read for Season 1, on the day Donald Trump was elected president, and why on this pandemic break he is reading books by Michael Ovitz and Bob Iger to gain further insight into the world depicted on the show — even if Succession is set in a fictional company, it’s not too far removed from reality.

We also talk about that memorable rap number he performed this past season and if he has any plans to pursue a musical career because of it.

Strong, whose films include such socially conscious real-life stories as  Zero Dark Thirty, Parkland, Selma, Black Mass, Molly’s Game, The Big Short, Detroit and the upcoming Trial of the Chicago 7, finds himself drawn to real-world stories of social justice. Chicago 7, in which he plays Jerry Rubin, comes from Aaron Sorkin, and Strong says it is one of the best scripts he has ever read. We begin in fact with the actor referencing the opportunities he has had that included working with Steven Spielberg on another true story, Lincoln.

To see this actor’s side of it all, check out the video above.