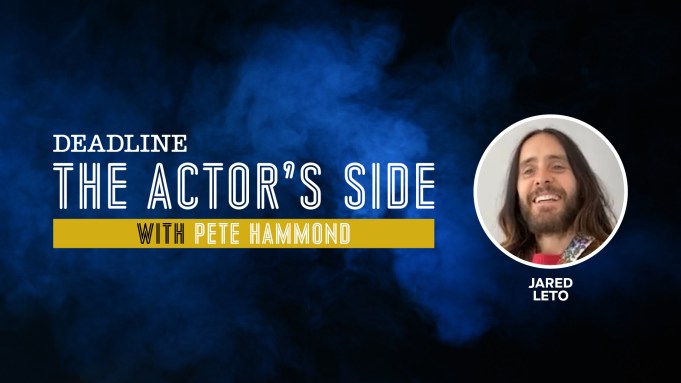 Jared Leto might be his generation’s leading character actor. When I told him during our conversation for this week’s edition of my Deadline video series The Actor’s Side, after looking at his filmography, that is how I would describe him, he took it as a great compliment. The proof is on the screen as Leto says he never wants to repeat himself — likely a key reason he has been so selective in the roles he chooses to play.

Those roles include in Prefontaine; Fight Club; Girl, Interrupted; American Psycho; Requiem for a Dream; Chapter 27; Blade Runner 2049; and, of course, his unforgettable Oscar-winning turn in Dallas Buyers Club, and now a whole new set of challenges. He’s dipping into the Marvel universe to take on the title role in Morbius, playing Gucci in a soon-to-shoot film, and there’s his own interpretation of Joker and top-secret appearance in Zack Snyder’s upcoming reworking of his Justice League. But first and foremost, Leto delivers one of his best performances ever as the creepy but complex and fascinating serial killer suspect Albert Sparma in John Lee Hancock’s thriller The Little Things, releasing this Friday (and which I reviewed on Tuesday). He co-stars opposite Denzel Washington and Rami Malek — a killer’s row of actors if ever there was one.

Leto talks about his initial resistance to play Sparma, but given his admiration for the film’s writer-director Hancock, and with the promise of taking things “as far as we could go — we went nuts,” he jumped wholeheartedly into playing Sparma in the superb new film that, as he describes it, “subverts the genre.” He discusses his physical transformation, with prosthetic nose, artificial teeth and brown eyes, among other alterations. Leto heaps praise on his fellow Oscar-winning co-stars and compares Washington to “Brando, Pacino, De Niro” all in one and says it was like playing a scene with Mozart.

We also discuss the process Leto has in order to choose his parts, like all that weight gain to play Mark David Chapman in Chapter 27, and upcoming projects including his Marvel experience in playing Dr. Michael Morbius, a vampire dying from a blood disease who experiments on himself in Sony’s Morbius, which recently saw its release date moved to 2022. He talks about preparing to play Gucci, in a new movie about to shoot from Ridley Scott and co-starring Lady Gaga, Al Pacino and Adam Driver. And Leto talks — for the first time, he says — about returning to play Joker in Snyder’s epic reworked director’s cut of Justice League. The actor says Joker might just be the Hamlet of our times, one different actors will play for decades to come.