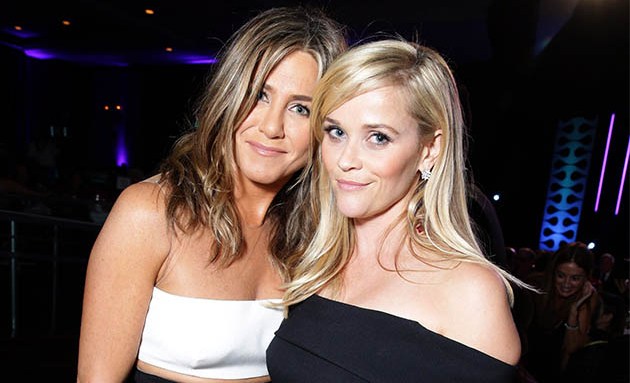 Jennifer Aniston and Reese Witherspoon took a walk down memory lane to the set of Friends.

Witherspoon had a brief guest run on the iconic NBC series in 2000, as Jill Green, sister of Aniston’s character Rachel Green.

During an interview with Access Hollywood this week, The Morning Show stars were shown a photo from a scene they did together back then. Witherspoon responded by saying, “That’s so sweet.” Aniston then asked her, “Is this where you say the line that you love so much?”

The two quickly got into character, although Aniston had forgotten the lines. No problem, Witherspoon whispered the words in her ear.

Witherspoon: “‘Can’t have? Can’t have?’ The only thing I can’t have is dairy!”

Witherspoon also shared the clip on her Instagram page and captioned the post: “One of the best parts of working with Jen is reliving my favorite lines from #FRIENDS! #theGreenSisters.”

The two were promoting their upcoming Apple TV+ series The Morning Show, which is set to premiere on November 1. Steve Carell, Billy Crudup and Gugu Mbatha-Raw also have roles in the drama, which pulls back the curtain on the cutthroat world of morning TV.

Written by Kerry Ehrin, the series is directed by Mimi Leder. Ehrin serves as showrunner and executive producer alongside Leder, Aniston and Kristin Hahn through Echo Films; Witherspoon and Lauren Levy Neustadter through Hello Sunshine; and Ellenberg through Media Res, which serves as the studio. CNN’s Brian Stelter consults on the project, with his book Top of the Morning providing additional background material.