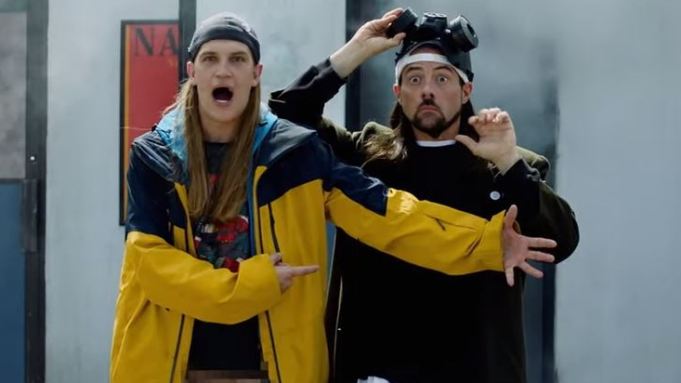 Brace yourselves for a cold, hard fact: It’s been a quarter-century since Jay and Silent Bob made their movie debut in Clerks. Now we have the first trailer for Jay and Silent Bob Reboot, and the Penn & Teller of the stoner set are battling Hollywood. Check out the decidedly NSFW trailer above and the first teaser poster below.

Jason Mewes and writer-direct Kevin Smith reprise their roles as, respectively,  the foul-mouthed Jay and his far, far less talkative buddy for like the hundredth time — and this time it’s meta. The logline can be summed up by this quote from the trailer: “Don’t tell me you guys have no idea there’s a new comic book movie being made of the old comic book movie you two were the basis for.”

Jay seems to remember: “That old-ass, star-studded piece of sh*t — that movie sucked balls!” Oh, did we mention that line was delivered in court? When the prosecutor says, “Your Honor, I object,” presiding Judge Craig Robinson hammers his gavel and says, “I’ll allow it. That movie did suck balls.” We’ll leave out what he and the bailiff also note.

Anyway, the knucklehead duo embark on another cross-country mission to “stop this movie from ever happening.” But before they do, Jay meets the “love child” he didn’t know he’d had with Justice (Shannon Elizabeth, from Jay and Silent Bob Strike Back). The kid (Harley Quinn Smith, the filmmaker’s daughter) is named Millennium Falcon, aka Milly, and she and members of her gang want to tag along for the journey to Hollywood.

Among other folks from the Smithverse appearing in Reboot are Brian O’Halloran, Jason Lee, Joey Lauren Adams and Jennifer Schwalbach Smith.