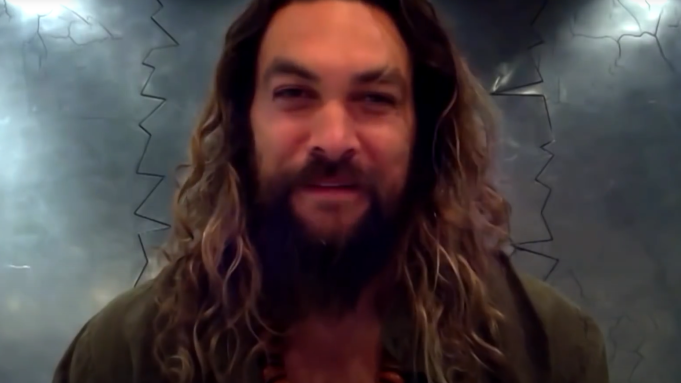 On Monday’s episode of The Late Late Show, Jason Momoa was asked if he is really making a buddy cop movie with his See and Dune co-star, Dave Bautista.

Corden’s question about the potential project was in reference to a Tweet published by Bautista on August 19.

“Just going to throw this out into the atmosphere and see what happens. Here we go…,” he wrote. “Me and Momoa in a Lethal Weapon type buddy cop movie directed by David Leitch. Ok! There it is. Now we wait.”

“I’m not even going to lie to you. I’m not on Twitter, but he literally texted me about four days ago going, ‘We need to do a buddy cop film,'” Momoa told Corden. “We love each other. We obviously met on See, we’re on Dune together, and so I said, ‘Absolutely.'”

Momoa said Bautista proposed shooting the film in Hawaii. “I’m like, ‘Let’s do it. I’ve got an idea,'” he shared. “So, it’s off to the races now. We’re doing it.”

“Hang on. This is what you can do when you’re Jason Mamoa and Dave Bautista?” the late-night host wondered. “You can go, ‘Let’s do this. Where should we shoot it? Hawaii. Done?’”

“It sells itself,” said Momoa. “Dave loves wearing speedos, I love wearing board shorts and both of us with our shirts off [in a] buddy cop film, he’ll be grumpy and I’ll be charming. Boom.

“I’ve got the hair, he doesn’t have hair,” the actor added. “We cover all the demographics.”

What might the title of this new film be? “I’ll leave that up to other people,” said Momoa.

The actor was on The Late Late Show to promote his Netflix action thriller Sweet Girl, which premiered on the streamer on August 20. Up next for him is Denis Villeneuve’s adaptation of Dune for Warner Bros. Pictures, which premieres at the Venice Film Festival on September 3, and will hit theaters in the U.S. on October 22nd.

Check out Momoa’s entire conversation with Corden above. Bautista’s original tweet about the buddy cop pic can be found below.

Just going to throw this out into the atmosphere and see what happens. Here we go… Me and Momoa in a Lethal Weapon type buddy cop movie directed by David Leitch. Ok! There it is. Now we wait.😬