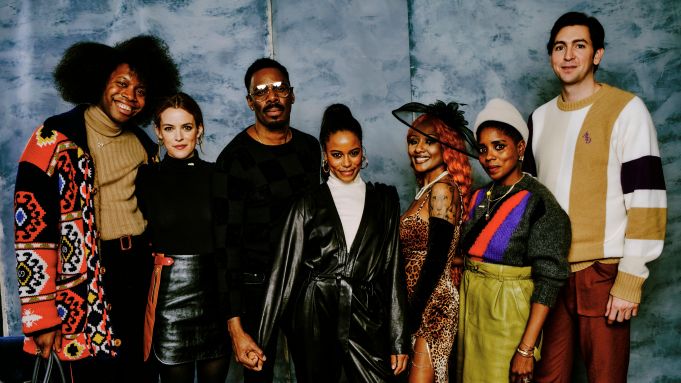 In 2015, a 148-word Twitter thread took the internet by storm. The tweets hailed from A’ziah King, a then 20-year Hooters waitress who had a chance encounter with a stripper named Jessica led to a wild 2-day Flordia trip that included prostitution, murder, and a violent pimp, who went by Z.

“What drew me most was her voice,” said Zola director and co-writer Janicza Bravo, who was on hand at Deadline’s Sundance studio along with the film’s stars Taylour Paige, Riley Keough, Colman Domingo, and Nicholas Braun as well as co-writer Jeremy O. Harris, and King.

“I hadn’t really experienced a story like that, I would say ever in my life,” Bravo added. “The tenor of it was just so clear and it was so strong and so confident. It was the fantasy version I have of myself in a way. I said this to her many times, but she was like a real-life superhero.”

Paige stars as the titular Zola,, a Detroit waitress who strikes up a new friendship with a customer, Stefani (Keough), who seduces her to join a weekend of dancing and partying in Florida. What at first seems like a glamorous trip full of “hoeism” rapidly transforms into a 48-hour journey involving a nameless pimp, an idiot boyfriend, some Tampa gangsters and other unexpected adventures in this wild, see-it-to-believe-it tale.

“I just think I’ve spent a lot of my life apologizing for who I am and this movie, I mean this role, this amazing human doesn’t apologize for her space, for agency, for her voice,” Paige said on how she connected to Wells’ story. “I’ve been praying, meditating, manifesting, something that could reflect that so that I could bind up with that.”

Following its premiere at the Sundance Film Festival, A24’s Zola was picked up Sony Pictures Worldwide Acquisitions for international distribution, with A24 planning to release the pic in the US something in the summer.