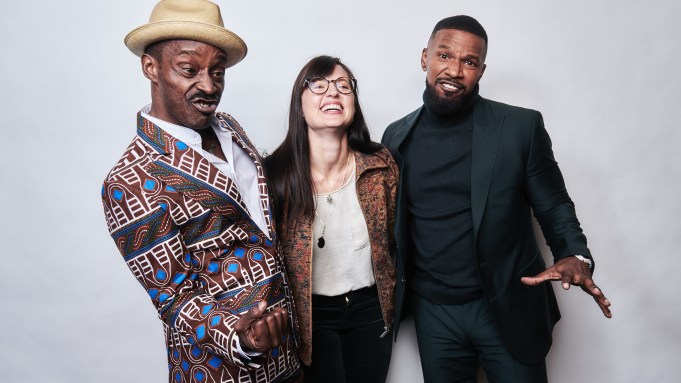 Based on Bryan Stevenson’s book of the same name, Destin Daniel Cretton’s film Just Mercy stars Jamie Foxx as wrongly-convicted death row prisoner Walter McMillian—a man without hope who is facing the electric chair when idealistic young lawyer Stevenson (Michael B. Jordan) takes on his case. It’s a harrowing and often shocking indictment of endemic racism in modern America, so it was no surprise when Foxx told Deadline’s Antonia Blyth at the ninth annual Contenders Los Angeles that he found the whole experience draining—and yet also incredibly moving.

“Getting into this character,” he said, “was so powerful… Just trying to dial in the Walter McMillian character—talking to Bryan Stevenson, since Walter was no longer with us—and finding out who he was. If you get a chance to see the movie, at the end, you’ll see that the one encouraging thing about taking on this character is that Walter and I aesthetically look similar. We had the same cheekbones, the same sort of diamond-shaped head. I even had that haircut in the ’80s that you see, the flattop. So, after having that, at least, close a proximity to the character, then it was just a case of building what Walter was.”

Co-star Rob Morgan admitted that he’d only found out about McMillian’s story “after reading the book, because I wasn’t even familiar with the whole thing”. He continues, “I’d just known about the justice system being crooked. Growing up as a Black man in America, I got so much information that I was able to delve into the character. The book actually is a beautiful read… [It] will actually prepare you [for the film], and make you want to do something about our justice system.”

Supervising sound editor Onnalee Blank agreed that this was a project that demanded a lot of careful investigation. “There was a lot of research involved,” he said. “We went to Rikers Island, we talked to an execution specialist, and all the dark, creepy stuff came out.”

For more on Just Mercy, click on the video above.