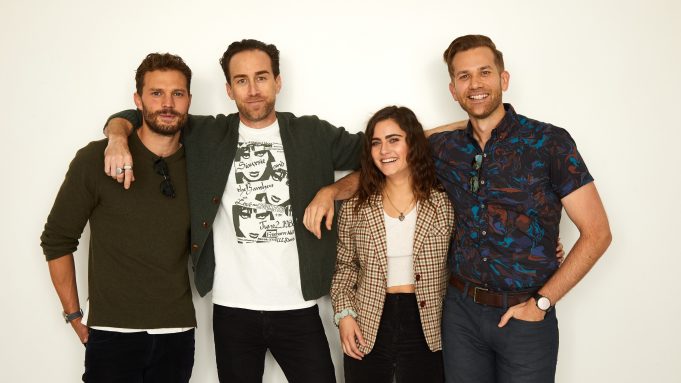 After cult favorites Spring (2014) and The Endless (2017) Aaron Moorhead and Justin Benson are starting to break out from under the radar with their trippy TIFF entry Synchronic. “It’s about two paramedics in New Orleans who have been friends for a really long time,” Moorhead explained when the directing duo stopped by the Deadline Studio, “and they are called out to these first responder calls that are linked together by this designer drug called Synchronic. It has some very bizarre effects, and Jamie [Dornan], who plays one of the paramedics with Anthony Mackie, [is shocked when] his daughter—who’s played by Ally [Ioannides]—disappears after taking the drug.”

Though the premise is pure futuristic sci-fi, the inspiration came from close to home. “In the United States,” said Benson, “we have these [recreational] drugs that can be sold over the counter and [at] head shops, and they are drugs that really do something, but there’s no medical research. They’re just put out by a company that’s like, ‘Well, we’re going to make a molecule that’s very similar to the illegal drug,’ and these synthetic analogs often actually do have very mysterious results…”

For Dornan, it was the blend of mystery and emotion that drew him in. “There are huge plot twists that happen, that we can’t reveal yet and that are very hard to talk about without saying what actually happens,” he said.” But the relationship between Anthony’s character and mine is tested in the most beautiful way, as a result of Ally’s character going missing, and that’s what actually got me at the end—the friendship [aspect] of it. What people will do for friendship is actually what made me cry at the end of the movie.”

To find out more about Synchronic, click on the video.