Continue to Deadline SKIP AD
You will be redirected back to your article in seconds
Skip to main content
May 24, 2019 12:49pm 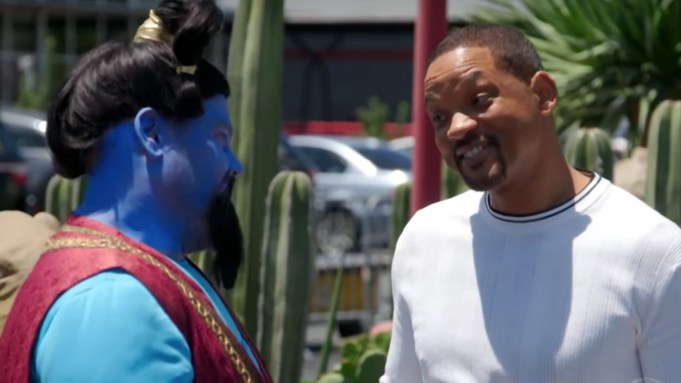 Last night’s “Crosswalk The Musical” bit from CBS’ The Late Late Show with James Corden was devoted to Disney’s live-action Aladdin, and Corden had the blues so bad someone mistook him for a Smurf. The cause, naturally enough, was Will Smith, who shows up just in time to steal the coveted genie role right out from under Corden’s blue nose.

So that’s the set-up. As always with the “Crosswalk” bits, Corden organizes a fairly elaborate musical scene to be performed in the middle of L.A. traffic. In this case, in addition to an ensemble of chorus line nobodies, he’s recruited the film’s Naomi Scott and Mena Massoud – Princess Jasmine and Aladdin, respectively – and Corden himself arrives in blue face and an elaborate genie costume, all set to take the best role for himself.

Then Smith shows up and demands to play his movie role, leaving Corden to play Abu the monkey.

This latest bit of street theater features the songs “Friend Like Me,” “Prince Ali” and “A Whole New World.”

The best gag comes when the sharp-elbowed Smith tries to boost Corden’s mood. “You’re comparing yourself to me? I’m a multiple Academy Award nominee.”

Responds a confused Corden, “I don’t know how that makes me feel any better.”

The Late Late Show with James Corden airs weeknights at 12:35 a.m. on CBS. Check out the Aladdin Crosswalk Musical above.