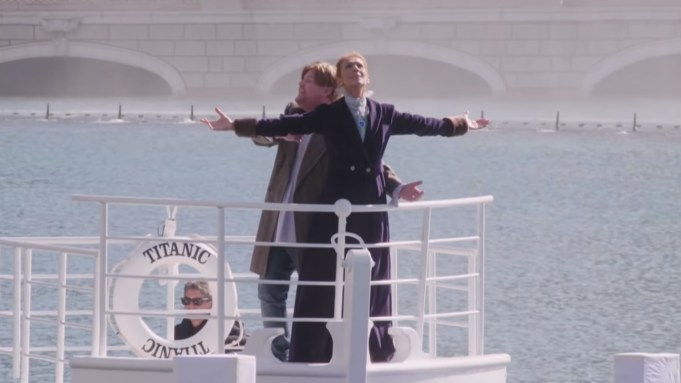 Some things never get old. Re-creating Leonardo DiCaprio’s famous arms-outstretched King of the World scene from Titanic isn’t one of those things, but when you have a ready-for-anything Céline Dion at your disposal, who could resist?

Not James Corden, certainly. On last night’s The Late Late Show Carpool Karaoke Primetime Special, Corden launched into his bit with Dion in the usual carpool fashion: He picked her up in his car, they bantered as they cruised Las Vegas, sang songs (including “Baby Shark,” which the chanteuse proved could be a very dramatic song indeed).

After some fan giveaways — Dion has more shoes that she’ll ever need, apparently — Corden and his guest got down to business: The two boarded a boat (stenciled with “Titanic,” no less) and set sail on the Bellagio Hotel and Casino moat, where host and guest did their best Leo and Kate as they sang Dion’s smash “My Heart Will Go On.” Watch that clip above and another below.

The special was Corden’s fifth primetime outing, and the first since 2018’s Carpool Karaoke: When Corden Met McCartney Live from Liverpool.