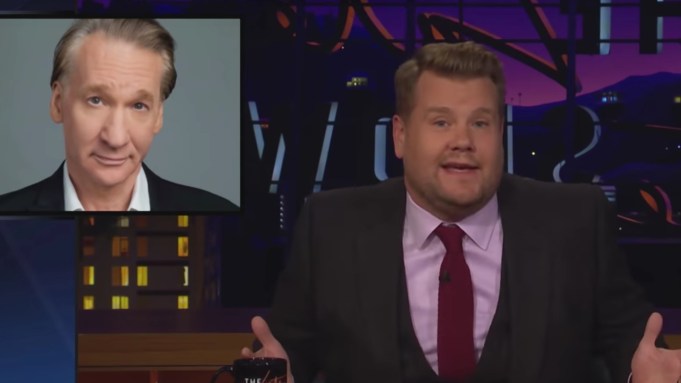 James Corden last night delivered a pitch-perfect and well-deserved take-down of Bill Maher’s absurd call to bring back fat shaming in this country. “Thanks for that Bill,” Corden said before putting the HBO host in his place. “Fat shaming is just bullying, and bullying only makes the problem worse.”

On last Friday’s Real Time With Bill Maher, the host concluded his New Rules segment with a bring-back-fat-shaming rant. “We’ve gone to this weird place where fat is good,” Maher. “It’s pointing out that fat is unhealthy that’s what is bad. Fat shame? We fit shame.”

Corden responded on last night’s The Late, Late Show With James Corden. “Fat shaming never went anywhere,” he said. “I mean, ask literally any fat person – we are literally reminded of it all the time – on airplanes, on Instagram, when someone leaves a pie on the windowsill to cool and they give us a look like Don’t you dare.”

Corden explained that after watching the Maher segment he thought, “If only there was someone with a platform who knew what it was actually like to be overweight, and then I realized, Aw that would be me.”

Mixing humor with heartfelt outrage, Corden said, “There’s a common and insulting misconception about fat people that we’re lazy and stupid. We’re not. We get it. We know that being overweight isn’t good for us and I’ve struggled my entire life trying to manage my weight and I suck at it. I have had good days and bad months.”

“We’re not all as lucky as Bill Maher,” the CBS late night host said. “We don’t all have a sense of superiority that burns 35,000 calories a day.”

Explaining that being overweight is a complex problem involving lack of education, dearth of healthy food options, poverty and genetics, Corden destroyed Maher’s simplistic take. Pointing to a recent study that identified a particular gene defect, Corden said, “If you shame the gene it actually fixes itself. I’m kidding. That’s not how science works. A lack of shame is not the issue here. If making fun of fat people made them lose weight there would be no fat kids in schools and I’d have a six pack by now.”

To which the CBS host snapped, “Believe me, I can see a dick.”

Check out the Corden video above.