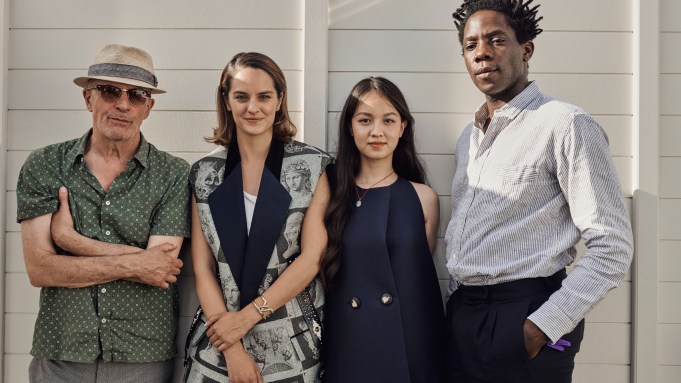 Jacques Audiard returned to the Cannes Film Festival competition this year with Paris, 13th District (Les Olympiades), an adaptation of stories by American comic book writer and artist Adrian Tomine. Shot in the French capital during the pandemic, and predominantly in black-and-white, it follows Emilie, Camille, Nora and Amber — four young adults who are friends and sometimes lovers.

Audiard and members of the cast visited with Deadline during the festival with the filmmaker discussing this change of direction following 2018’s English-language western, The Sisters Brothers which starred Joaquin Phoenix, John C Reilly, Riz Ahmed and Jake Gyllenhaal.

Said Audiard, “The previous film will dictate the following one. The Sisters Brothers was the opposite” of Paris, 13th District as that film was dominated by men. Noted Audiard of the current movie, “It’s with women, with no violence, with love. It seems silly, but it’s true every film produces a field of frustration that the next film will grant.”

The film also involves a great deal of sex and Lucie Zhang (Emilie) said there was “a gap between shooting the sex scenes and my memory; when you see it, you feel it’s true.” Noémie Merlant (Nora) added, “We had a lot of fun, it was a happy rehearsal process; we thought it was a comedy so let’s have fun.” For Audiard, “To talk about love and sex during the lockdown is so important.”

Audiard collaborated with Nicolas Livecchi, Léa Mysius and Céline Sciamma on the writing. “I’ve known Céline for a long time,” he said. “She’s a great screenwriter and most of all, she’s a director and I think it’s very interesting to have as a screenwriter a director.”

Playtime has sold the film well across the world including to IFC Films for the U.S. and Curzon for the UK. Memento is releasing in France.