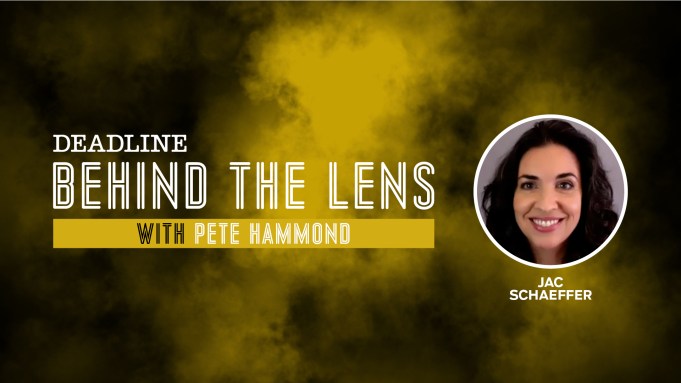 Joining me for this week’s edition of my Deadline video series Behind the Lens is Jac Schaeffer, creator, EP and head writer of Disney+’s Marvel limited series breakout WandaVision, a unique show blending the MCU characters Wanda and Vision with classic television sitcoms like The Dick Van Dyke Show and Bewitched among others. Taking place after the events of Avengers: Endgame, it reunites Elizabeth Olsen as Wanda Maximoff/Scarlet Witch with Paul Bettany’s Vision and explores their relationship in part by placing the characters in situations and re-creations of some classic TV comedies, while merging with the strange goings-on you might expect to find coming out of both the worlds of the Marvel Cinematic Universe and its comic book origins.

Although the idea to put Wanda and Vision in various sitcom takeoffs was that of MCU guru Kevin Feige, the series was put squarely in the hands of Schaeffer, who got her feet wet as a contributing writer for Captain Marvel as well as one of the writers of the new Black Widow film. She wrote the first and last episodes of WandaVision and supervised a diverse writers room to turn out the nine-episode arc. In the discussion will talk about how it was all done, plus her efforts to make sure the MCU casts a wide net of diversity for women, people of color, LGBTQ community members and more. She also gives us a peek into just where the long awaited Black Widow will be taking us upon its release this summer.

Schaeffer also tells me she has wanted to direct since she was 14. She made her debut behind the camera with 2009’s TiMER a few years after graduating from Princeton and earning a master’s at USC Cinema School. In addition to the Marvel movies she also co-wrote the 2019 Anne Hathaway-Rebel Wilson film The Hustle.

To watch our conversation and go behind the lens with Jac Schaeffer, click on the video above.

Catch a new Behind the Lens every Friday during Emmy season.