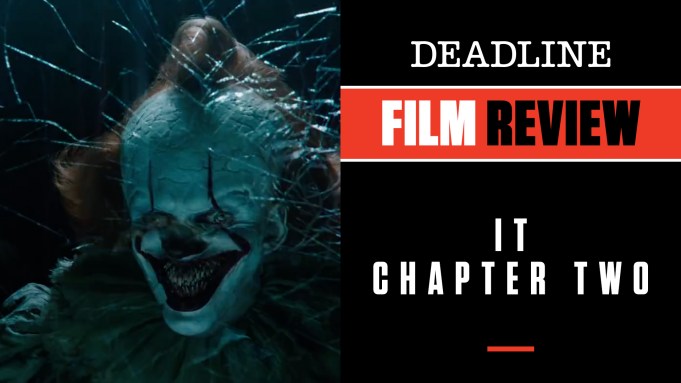 When your movie makes $700 million, it inevitably is going to trigger a sequel. In the case of the 2017 film adaptation of Stephen King’s novel It, the second film is not a sequel by definition but rather the final chapter of a two-part movie. At least that is what Warner Bros says.

It makes sense because only about 300 pages of King’s novel was covered in the first film and all that revolved around the young kids of Derry, ME, aka Losers Club, who fought their fears and vanquished Pennywise, the frightening shape-shifting clown who terrorized the town in 1989. But the book ran 1,100 pages and darted back and forth between the time periods of 1989 and 27 years later, when the all-grown up kids return to Derry at the request of Mike (Isaiah Mustafa), the only member who didn’t move away.

That is the crux of this second part known as It Chapter Two. Pennywise is back in the dark and foreboding town and wreaking havoc again, and only the adult “Losers” can change the trajectory. In this film — way overlong at two hours, 49 minutes (!) — all the Losers return to do battle and individually face their darkest fears stemming from those childhood encounters with this evil clown who can morph into all sorts of special effects.

Bill (James McAvoy) goes right back to that water drain of horrors. Beverly (Jessica Chastain) tries to check on her father, only to be told he is dead, and the strange old Mrs. Kersch (wonderful Joan Gregson) invites her in for tea and terror. It goes on for each of them in different ways including Richie (Bill Hader), Ben (Jay Ryan), Eddie (James Ransone) and Stanley (Andy Bean), the only Loser who didn’t want to reunite. They all eventually must face Pennywise (Bill Skarsgard), who has a lot of clown tricks up his sleeves. Think of it sort of as a horrific Big Chill(s) kind of reunion.

None of this means the kids from the 2017 film are out of the picture. They turn up in flashbacks, and even sometimes with their older selves in the same scene. Screenwriter Gary Dauberman has delivered what is expected from those who read the King book, and director Andy Muschietti knows how to work up the tension and give each of the older stars fun stuff to play with before the big final battle that will determine control and the future of Derry. It’s already a dismal place full of racists, homophobes and bigots — all meant to be a comment on just where our country seems to be going. A pretty horrific hate crime gets things going to give you an idea just how awful the place has become. It’s not a home this group wants to remember growing up in.

Not to worry, though: It Chapter Two is not preachy in the least, and it’s more entertaining than the original, if you ask me. That’s thanks to this perfectly chosen cast, each a unique talent in their own right. That final battle is a real doozy, full of shape-shifting clown gags and gross-out moments, but it all goes on way too long for comfort. I think you could cut the movie by 15 minutes and not miss a bit, but clearly these talented filmmakers decided that bigger is better, and that is what we get in the end. Still, there is lots of fun to be had in all that leads up to the finale. It’s also lots of fun also to see King himself in a Bruce Dern-like cameo as a local store owner.

If this edition is successful — and who would make a bet that it won’t be? — it would be hard to imagine carrying on with yet another chapter, as it were. And I doubt Warner Bros would be content to stop where King did. We shall see. Meanwhile what we’ve got is fun, if you are into this kind of thing — and don’t mind clowns.

Producers are Roy Lee, Dan Lin and Barbara Muschietti. Warner Bros has Friday all to itself for the film’s release. Check out my video review with scenes from the film by clicking the link above.

Do you plan to see It Chapter Two? Let us know what you think.