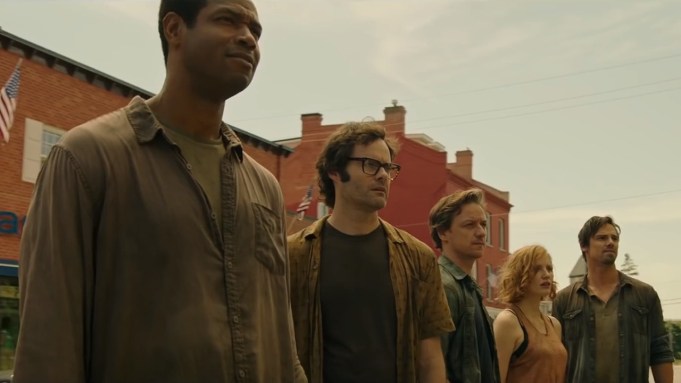 The trailer was one of four new pieces of footage revealed last night at the pre-Comic-Con shindig , along with a sequence of the Losers Club (Jessica Chastain as Beverly Marsh, Bill Hader as Richie Tozier, James McAvoy as Bill Denbrough, Jay Ryan as Ben Hanscom, James Ransone as Eddie Kaspbrak, Isaiah Mustafa as Mike Hanlon, and Andy Bean as Stanley Uris) as adults reuniting at a Chinese restaurant, only to be stirred up with fortune cookies; a scene with Bill Denbrough (James McAvoy) being tormented by Pennywise the clown in a funhouse of mirrors; and the gang descending upon the clown’s haunted house.

Andy Muschietti, who made history in 2017 with the first installment of Stephen King’s bestseller with a horror record $700+ in global box office, returned for the sequel which also brings Pennywise who in the new trailer seems quite happy to have the gang back together again in their hometown 27 years later in the film’s timeline.