Continue to Deadline SKIP AD
You will be redirected back to your article in seconds
Skip to main content
September 21, 2020 10:17am
3Comments 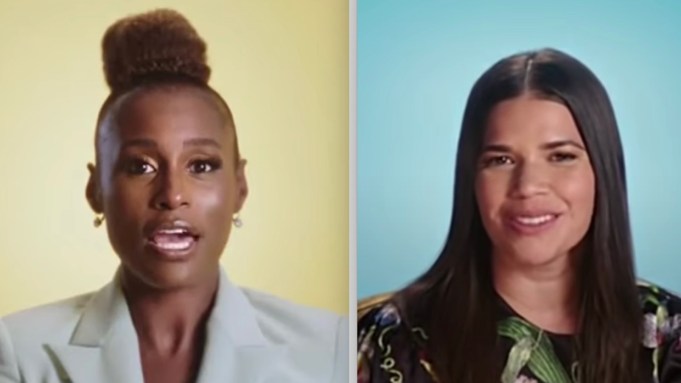 On Sunday night’s Emmy Awards broadcast, Issa Rae, America Ferrera and Lena Waithe shared stories of early auditions, pitch meetings and TV watching that would fuel their motivation, as actresses and creators of color, to work for more diversity and inclusion in the industry.

“And I was like, ‘That’s not what it’s about, but OK,'” Rae said. The boom was lowered when the exec requested Rae use more familiar actors because that’s what Black audiences favor.

“Why does he get to tell me what people like me like to see?” Rae said, adding that the experience provided the motivation she needed to “bet on myself.”

“One of us got fired after that,” she added with a laugh.

Emmys And Diversity: Strides For People Of Color In Major Acting Categories; Huge Win For Black Actors And LGBTQ Representation

Director, producer and Superstore star Ferrera said her first audition at age 16 inspired her to work toward greater representation in the entertainment industry.

Describing her teenage self as “a little, brown, chubby Valley Girl,” Ferrera remembers being told by a casting director to “sound more Latina.”

“I am a Latina, and this is what I sound like,” Ferrera told the casting director, getting an “OK, sweetie, bye” in response.

She recalled that when she told her family about the experience, they told her, “‘They wanted you to use broken English. They wanted you to sound like a chola. What did you think was going to happen — they were going to have you starring in the next role meant for Julia Roberts?’ And I thought, ‘Yeah, that is what I thought.'”

Also Sunday, screenwriter, producer, Master of None actress and The Chi creator Lena Waithe spoke about the importance of representation on television, recalling the moment when, as a child, she first saw Jada Pinkett Smith (then without the Smith) on A Different World. Smith played a character also named Lena. It felt like, she says,”the universe was speaking to me.”

Watch the Rae segment above, and the Ferrera and Waithe clips below.