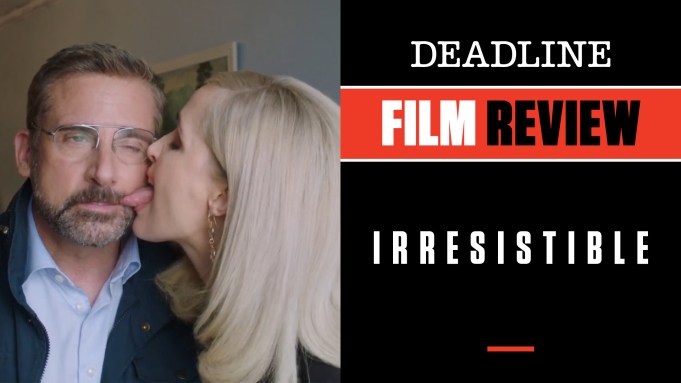 Irresistible is a timely and smart political satire that is exactly what I would expect and hope for from its writer-director Jon Stewart. What I wasn’t expecting, however, is that it would evoke fond memories of Frank Capra and, even in its most wickedly twisty moments, Billy Wilder. Stewart is a shrewd dude, and he aims his camera at capturing the money-drenched arena of American politics by putting it all through the lens of what on the surface is a minuscule election for mayor of a small Midwestern conservative town where I wouldn’t be surprised if the cows outnumbered the voters.

Joining him here is his former The Daily Show cohort Steve Carell, who is, as you might expect, very funny but also delivering a truthful look at a guy trying to match his own personal convictions in a career that requires knife-sharp sensibilities. Jack Lemmon could have played him in a different era, but Carell strikes just the right balance in making him fully three-dimensional, even a little bit sad. He’s Gary Zimmer, a hot-shot Democratic political consultant who sees a viral video of retired Marine Lt. Col. Jack Hastings (Chris Cooper) delivering a heartfelt speech supporting some undocumented immigrants at a small town council meeting in Deerlaken, WI. Immediately a light goes off, and Zimmer thinks he has the perfect candidate to mold in the local mayoral election because he believes this is exactly what he can sell to an electorate starved for authenticity in their leaders. This race is just small potatoes, of course, but Stewart has the whole sad state of campaigns in America squarely in mind as the ultimate target, as once Zimmer persuades Hastings to run it all becomes about money, political imagery, money, underhanded politics and did I say money?

Of course it is all absurd that this tiny town’s mayoral race could reverberate nationally, but that’s the fun of it, especially as the GOP gets wind of the race and sends in Zimmer’s archrival consultant, Faith Brewster (a superb Rose Byrne), to handle the re-election bid of Republican incumbent Mayor Braun’s (Brent Sexton). No one is spared here, and that definitely includes the media, which is wickedly skewered.

In a world where all our politics, and most everything else, have gone partisan, Stewart aims to call it all out for what it is. Capra’s 1939 classic Mr. Smith Goes to Washington — starring another famous Stewart, as in James — clearly is an inspiration here, but so are sharp -edged political satires such as Gore Vidal’s biting The Best Man and particularly 1972’s The Candidate with Robert Redford, a movie still razor-sharp that has much in common with what the writer-director is doing here. That Michael Ritchie film was awarded with an Oscar for its screenwriter Jeremy Larner, who came from the political world himself.

I also mention Billy Wilder because no one did better on this level (you could throw in Kubrick’s Dr. Strangelove too), both in something highly dramatic like 1951’s Ace in the Hole aka The Big Carnival, about the media circus surrounding events involving a rescue of a man trapped in a cave, or his 1961 satire One Two Three.

Stewart has perfectly timed this film for our election season which in the Trump era promises to go into dark, dark places, but maybe Irresistible can do what the best satire does and make us look inward before it’s too late. After all, as the film points out, the word that is sandwiched in the film’s title is “resist.”

The interplay between Byrne and Carell is lots of fun to watch as both stars make you instantly believe in their shared history and the way it all comes to a head in a battle royal for the heart of the Heartland, or at least a piece of it. Stewart was inspired by a real-life 2017 congressional race in Georgia, which became an outsized contest that, considering the amount of money thrown at it from those who live nowhere near the district it was about, became a symptom of just what is wrong with the way our representatives are chosen and what they must do even get to that point. Cooper delivers a wry and knowing turn as the reluctant candidate, perfectly cast here. Also fine is Mackenzie Davis as Zimmer’s daughter, who is helping out on the campaign; Topher Grace as a pollster; and Natasha Lyonne as an analytics whiz.

Stewart proved with his criminally underseen 2014 feature debut, Rosewater, that he has the filmmaking chops, and he just reinforces that here in a surprising comedy with a twist I never saw coming. ‘Nuff said. Don’t resist, see it.

Producers are Dede Gardner, Jeremy Kleiner, Lila Yacoub and Stewart. Focus Features sends it out on premium VOD this Friday. Check out my video review with scenes from the film at the link above. Do you plan to see Irresistible? Let us know what you think.