Continue to Deadline SKIP AD
You will be redirected back to your article in seconds
Skip to main content
September 26, 2019 3:41am
4Comments 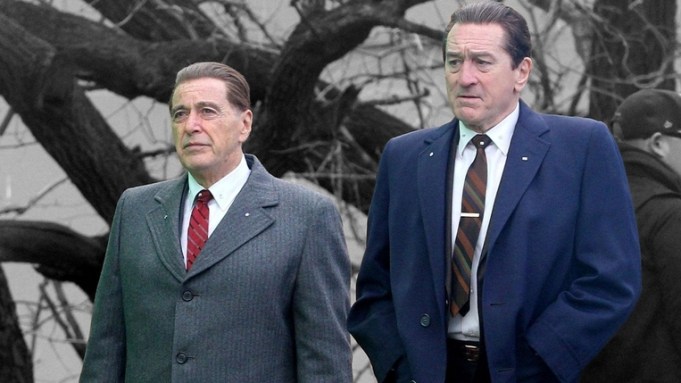 Here’s a second trailer for Martin Scorsese and Netflix mobster pic The Irishman, which gets its world premiere at the New York Film Festival tomorrow. The trailer debuted last night on the Jimmy Fallon show, which hosted Robert De Niro.

The anticipated crime-epic tells a sprawling story that culminates in the murder of Teamster boss Jimmy Hoffa — played by Al Pacino — as seen through the eyes of WWII vet Frank Sheeran (Robert De Niro), a hustler and hitman who claims he ended Hoffa’s life on orders of mob boss Russell Bufalino (Joe Pesci). Hoffa’s body has never been found and Sheeran’s admission is one of numerous theories of the union boss’s demise.

De Niro told Fallon he first read the book the film is based on more than a decade ago, “It’s a story about a guy stuck in the middle of two people, who had to make a choice, which was a matter of survival.”

The Oscar-winner added that he and fellow on-screen icon Al Pacino are friends but that they had competed for the same roles at times in their career.

The film will have a 27-day theatrical window from November 1 in U.S. before it makes its streaming service bow November 27. In the UK, the movie is due to launch on November 8. Theatrical buy-in has been hard to come by with the major chains but the movie should get plenty of play among smaller indies, enough to guarantee awards consideration.

Producer Jane Rosenthal told us at the Emmys on Sunday, “What will surprise you is, as a Scorsese movie, it is a slower movie. It doesn’t have the kind of intensity, the visual intensity, as a Casino, as a Goodfellas. It is guys looking at themselves through an older perspective.”