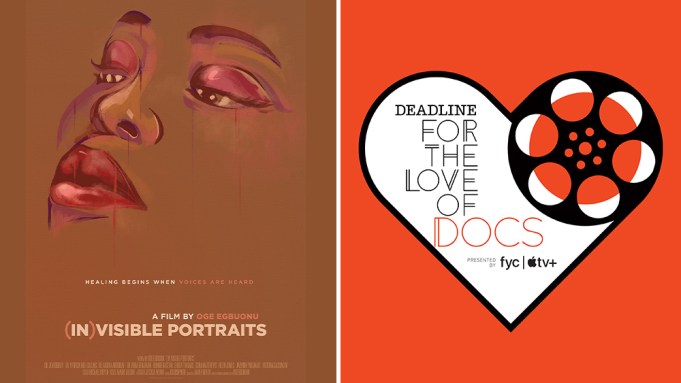 “Resilient, hurt and beautiful,” are the three words Oge Egbuonu used to outline her directorial debut (In)Visible Portraits, a powerful and timely documentary that showcases the history of Black women and tackles false and stereotypical narratives while celebrating the legacy of those who have come before and igniting hope for the next generations.

During an appearance at Deadline’s For the Love of Docs panel presented by AppleTV+, Egbuonu expanded on her approach. “The hurt aspect was really approaching it from a 360 standpoint of Black women being hurt physically, mentally and emotionally. And then resiliency — how it is a double-edged sword typically, right? Depending on who’s holding that label, depends on the definition of resiliency. And then the beautiful aspect was just really celebrating the beauty of Black women. And not just the physical beauty, but the emotional and the spiritual and the mental beauty of Black women.”

The docu aims to shatter the too-often invisible otherizing of Black women in America and reclaims the true accounts as told in their own words. The idea was sparked by producer Michael Meyer, who was inspired to make a film about Black mothers after seeing a clip of NBA legend Isiah Thomas being inducted into the Basketball Hall of Fame in which he was “honoring his mother about all the sacrifices that she had made.”

From there, Egbuonu spent years fine-tuning the concept. “I really immersed myself into the history of black women in America,” she said, ultimately approaching the story through in-depth and candid sit-downs with scholars, authors and “everyday women.”

“I reached out to so many scholars and so many authors and ask them if they lend their voices to this documentary, but then I also wanted it to be relatable,” the filmmaker added. “And so I wanted to use the voices of women who we deemed as everyday women and girls.”

Egbuonu noted that she took the time to get to know the women before they shared their stories.

“First and foremost, I wanted to get to know them and build a relationship,” she said. “And luckily for me, after doing that, all these women and girls said yes to contributing their voices to this narrative.”