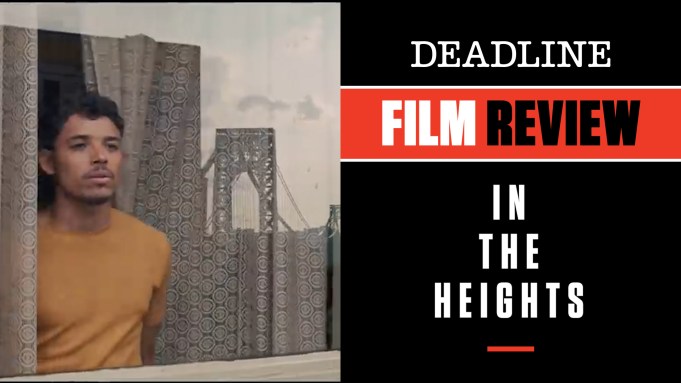 Before Hamilton, Lin-Manuel Miranda had another Tony-winning smash on Broadway in 2008 with his heartfelt and personal tribute to “home.” In the Heights, in which he starred, now has been turned into a dazzling, dance-filled movie shot in the heart of NYC’s Washington Heights, a 40-block area starting at 155th Street that Miranda knows well, bringing it to vivid life on stage. The honors of the lead role of Usnavi in the film, however, go to Anthony Ramos, who serves as narrator of this heartfelt musical tour of the Latino community that dominates those 40 blocks. But fear not, because the composer gets the much-smaller role of the Piragua Guy as he pushes his cart around the streets competing with Mister Softee Guy (and stay past the end credits if you want to catch all of Miranda’s performance).

Miranda gave life to this project while he was still a student, and as such it is a lively, entertaining and richly energetic work but still only a prelude for the masterpiece of Hamilton, which would transform Broadway and the musical form a few years later. The prolific talent is having quite a moment now on the screen, not only with the filmed version of the original cast of Hamilton becoming a huge hit on Disney+, but also another film version of a stage hit, Tick Tick…Boom, which he has directed for Netflix, and two animated films — Vivo and Encanto — for later this year. But In The Heights, now seeing a release delayed a full year by the pandemic, is given the full-blown treatment of a large-scale film musical by director Jon M. Chu (Crazy Rich Asians).

This film spotlights the immigrant experience of an area that has been home over time to everyone from Jews to Dominicans to now a proud Latino population. Chu has taken the stage experience and enhanced it for the camera and, thanks also to the striking choreography of Christopher Scott, has staged one visually thrilling dance sequence after another. In fact, it is those dancers –the sheer number of names alone dwarfs the end credits — who steal the show here, particularly in the extended opening title number, the stunning “Carnival del Barrio” and the joyous “$96,000,” which takes place partially in a huge swimming pool with dancers and about 500 extras in a glorious tribute to the legendary musical numbers of Busby Berkeley, among other influences on display here.

Lin-Manuel Miranda Debuts New ‘In The Heights’ Trailer During Oscars

The story itself, with a screenplay by original book writer Quiara Alegria Hudes, is not all that complex and mostly serves as a bridge to all the songs. it centers on Usnavi, who tells the story of the Heights to a group of school children gathered on a beach, zeroing in on his life in the bodega as he weaves in and out setting up the action and characters we will meet. Among them are bodega employee and pal Sonny (Gregory Diaz IV), who also is facing immigration issues — a development added from the stage version to make it more relevant in the 12 years since the show debuted. There also is the community matriarch Abuela Claudia (a wonderful Olga Merediz) and a young Black man named Benny (Corey Hawkins), who has blended into this community and dates Nina (Leslie Grace), whose father Kevin Rosario (Jimmy Smits) runs the car service Benny works for. She is home for the summer after being the person who is moving on up, as it were, now attending Stanford University. But, unlike the financial conundrum the character felt in the stage version, here she has doubts about being away from home and fitting in at a place she thinks she does not belong, no matter how proud everyone is that she got accepted.

Vanessa (Melissa Barrera) has dreams of being a fashion maven and works at Daniela’s, the local salon where salty and savvy owner Daniela (Daphne Rubin-Vega) and business and life partner Carla (Stephanie Beatriz) hold court, along with a third wheel named Cuca (Dascha Polanco). The fact that Daniela and Carla are together romantically as a couple is another added twist to this film version, and it seems the right touch. In the plotline, the salon also is changing as they are in the midst of moving locations, a momentous thing for the Heights. It is, in fact, a summer of change for all of these characters as their personal stories are woven in and out of the musical action.

What all of it represents, though, is pride of community and connection, and Miranda’s astute score — with strong doses of hip hop, Latin, pop and Broadway — serves up one opportunity after another for this terrific ensemble of mostly Latino performers to shine. Production-wise, Chu, who helped make Crazy Rich Asians so visually alive, has done the same thing for the colorful actual locations of the Heights, giving us entry into a locale as unique and rich as any film setting no matter where they are in the world.

Whether by fate or not, the time for a big, splashy screen musical — one that celebrates the immigrant experience with an inspiring human touch — could not be better, and for that reason Miranda’s unique creation reaches heights all its own on the big screen. And though it will be debuting day-and-date June 11 on HBO Max, this is one that Warner Bros also is putting in theaters, where it really should be seen if at all possible.

Miranda, Hudes, Scott Sanders, Anthony Bregman and Mara Jacobs produced. Check out my video review with scenes from the film at the link above.

Do you plan to see In The Heights? Let us know what you think.

And as presented at Wednesday’s The Big Screen Is Back event click on info and trailers for all the upcoming movies this summer season right here at:

Summer Movie Preview: A Flip Book Guide to Films on the Big Screen