The Film That Lit My Fuse: Oscar-Winning Director Ron Howard
Read the full story
May 29, 2019 6:53am
1Comments 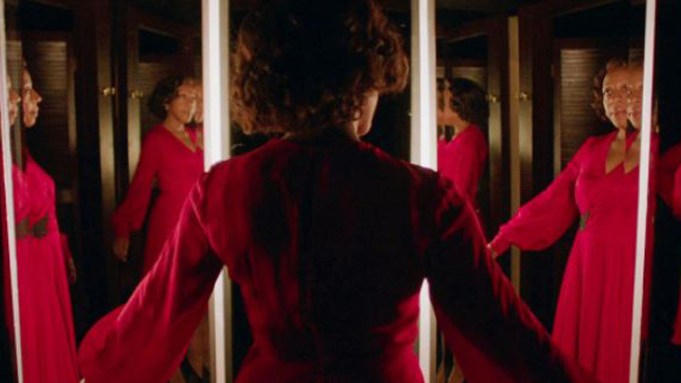 Expect plenty of “killer dress” headlines when reviews of and articles about the horror film In Fabric get written – including this one, plugging what looks to be a pretty cool trailer. “Killer dress” is just about tailor-made for writer-director Peter Strickland’s upcoming movie, coming soon from A24.

In Fabric – A24 picked up North American rights at the Toronto Film Fest – stars Marianne Jean-Baptiste as a lonely woman who, recently separated from her husband, goes dress hunting as a bit of a pick-me-up. She finds just the right one at a London department store, a blood-red gown that soon leaves her with a nasty rash and some hand damage. As the synopsis goes, the dress unleashes “a malevolent curse and unstoppable evil, threatening everyone who comes into its path.”

Based on the stylish trailer, In Fabric seems to have a sewn-in sense of humor as rich and lush as the dress’ particular shade of red. Strickland is best known for the sadomasochistic romance The Duke of Burgundy.

“The washing machine went bananas,” explains the mystified dress-wearer when asked how she injured her hand. Sounds reasonable.

A24 hasn’t set a release date for In Fabric beyond “coming soon.” In the meantime, window shop with the trailer above.