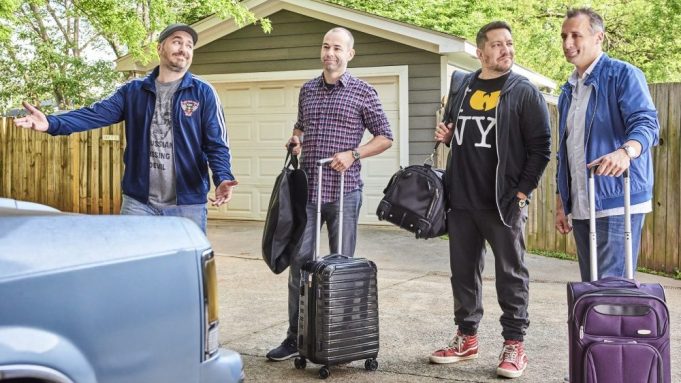 TruTV’s Impractical Jokers is bringing their hidden camera hijinks from the small screen to the bring screen with Impractical Jokers: The Movie from director Chris Henchy (Daddy’s Home, Eastbound & Down) and produced by Funny or Die. The film is set to open in theaters on February 21, 2020.

The film stars James “Murr” Murray, Brian “Q” Quinn, Joe Gatto, and Sal Vulcano — also known as the comedy troupe The Tenderloins. The narrative feature will have the guys playing themselves as they revisit a humiliating high school mishap from the early nineties. As seen in the trailer, the gang gets invited to a party in Miami hosted by pop star Paula Abdul. The only problem is, she only gave them three tickets and there are four of them. From there, they hit the road in order to compete in hidden camera challenges for the chance to turn back the clock and find redemption. The movie folds in real-life footage of over-the-top jokes and callbacks from the series to the fictional narrative.

The film is produced by Gatto, Murray, Quinn, Vulcano, Henchy, and Funny Or Die’s Jim Ziegler and Buddy Enright. Executive producers include Jack Rovner and Funny Or Die’s Mike Farah and Joe Farrell. On the TV side, Impractical Jokers will return to TruTV with new episodes on January 30, 2020. The series will air its 200th episode on February 13 and will be the first time they shoot in Los Angeles.