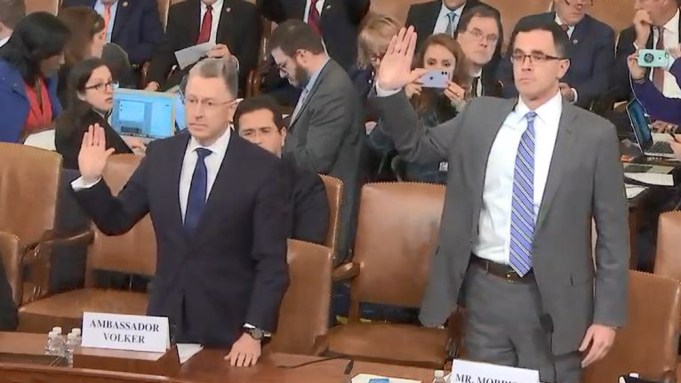 Today’s hearing will take place in two increments. The afternoon session will feature Ambassador Kurt Volker, Former U.S. Special Envoy to Ukraine and Timothy Morrison, Special Assistant to the President and Senior Director for Europe and Russia, National Security Council. Both are political appointees whose testimony was requested by House Republicans.

On the witness stand this morning were Jennifer Williams, Special Advisor for Europe and Russia for Vice President Mike Pence. Her appearance was followed by that of Lt. Col. Alexander Vindman, Director for European Affairs for the National Security Council. Both of them were on President Donald Trump’s call with Ukraine President Volodymyr Zelensky that is at the center of the impeachment hearings.

Witnesses deliver opening statements and then will be questioned in 45-minute blocks of time from each side. Each side can choose their respective counsels to do the questioning. That is a break from typical recent hearings, in which members questioned witnesses in five-minute increments, alternating between Democrats and Republicans based on seniority. That still will happen — but it will only come later in the hearing.

Rep. Adam Schiff (D-CA) is overseeing the hearings in his role as chairman of the House Intelligence Committee. The GOP contingent is led by fellow California Rep. Devin Nunes.