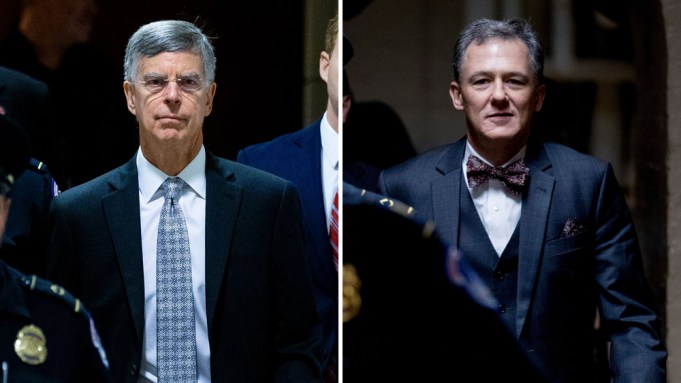 The time has come. The day is now. History will be made in Washington, D.C., today as the first televised hearings in the House impeachment hearings on President Donald Trump begin at 7 a.m. PT. Watch the livestream here.

Rep. Adam Schiff (D-CA) chairs the House Intelligence Committe and will oversee the hearings, which are televised versions of closed-door testimony from recent weeks. The GOP contingent is led by fellow California Rep. Devin Nunes. They will hear today from William Taylor, the top diplomat in Ukraine, and George Kent, the deputy assistant secretary of state and the State Department’s lead career official focused on that country.

Taylor and Kent will deliver opening statements and then will be questioned in 45-minute blocks of time from each side. Each side can choose their respective counsels to do the questioning. That is a break from a typical hearing, in which members questioned witnesses in five-minute increments, alternating between Democrats and Republicans based on seniority. That still will happen — but it will only come later in the hearing.

Schiff on Tuesday revealed the people who will testify during next week’s impeaching inquiry hearings. Tuesday will see testimony from Jennifer Williams, an aide to Vice President Mike Pence;  Lt. Col. Alexander Vindman, an Army officer and Ukraine specialist on the National Security Council staff; Kurt Volker, the former special representative to Ukraine; and Tim Morrison, the top Russia and Europe adviser on Trump’s National Security Council. Wednesday it’s Gordon Sondland, the U.S. ambassador to the European Union, who famously “revised” his closed-door testimony last week; Laura Cooper, deputy assistant secretary of defense for Russia, Ukraine and Eurasia; and David Hale, the No. 3 official at the State Department. Thursday’s guest before the House Intel Committee will be Fiona Hill, former National Security Council senior director for Europe and Russia.