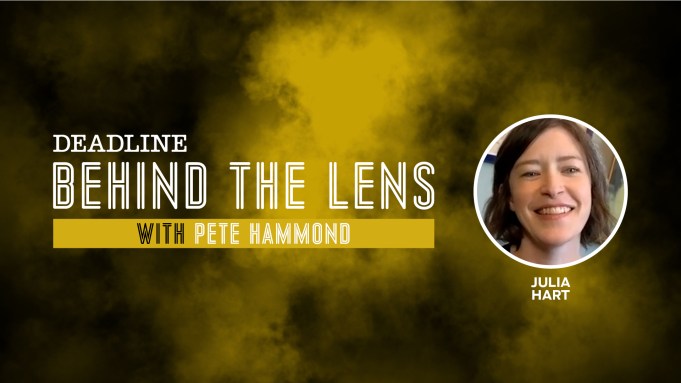 This has been a very promising movie awards season for advancement of female directors  into the conversation.  Chloe Zhao, Emerald Fennell, Regina King all have landed significant  nominations for their work this year , and the list goes on from there prominently including Julia Hart and her noirish thriller, I’m Your Woman which Amazon premiered at the AFI Fest and has since gone on to great critical success and gathering a strong following on Amazon’s streaming service.  Hart has been on the most promising directors list – male or female  – in recent years. Among other notable achievements  her feature film directorial debut , 2016’s Miss Stevens also was the first film to bring Timothee Chalamet to prominence, and she has repeatedly shown a great eye for talent in subsequent films that include 2018’s Fast Color , and 2020’s Stargirl for Disney +.   I’m Your Woman , which stars Rachel Brosnahan in a strong departure from her Marvelous Mrs. Maisel persona, is  also completely different for Hart , dipping into the kind of noirish dramas popular in the 70’s but this time focusing on the female characters who rarely get the spotlight in this genre.  That is definitely a hallmark of Hart’s increasingly impressive filmography, a focus on female characters of all stripes , strong roles for women that she , and her husband/writing/producing partner Jordan Horowitz (La La Land) come up with in their prolific turnout of projects in just the last four years.  Hart joins me for today’s episode of my Deadline video series, Behind The Lens as we take a deep dive into the career of this talented writer/director and see what inspires her, how she develops her projects, and  manages to keep changing it up.  To watch our conversation just click on the link above.