Continue to Deadline SKIP AD
You will be redirected back to your article in seconds
Skip to main content
August 28, 2020 6:41pm 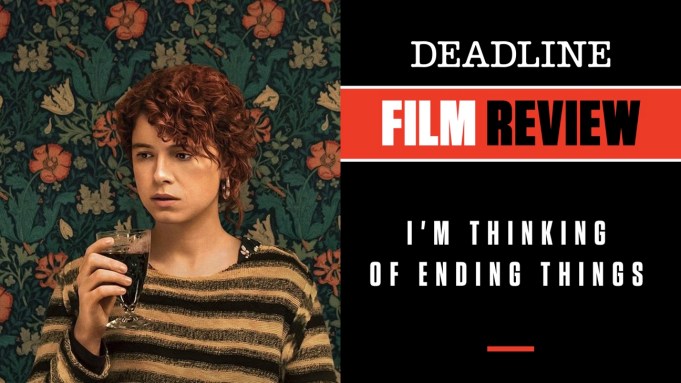 Right from the title alone, Oscar-winning writer-director Charlie Kaufman is asking you to interpret the meaning of his new film I’m Thinking of Ending Things on your own terms. Basically, whatever you make of it is fine with him.

The writer of such mind-twisting, head-exploding movies as Eternal Sunshine of the Spotless Mind (for which he won a Best Original Screenplay Oscar), Adaptation, Being John Malkovich, Synecdoche: New York (his directorial debut) and the animated Anomalisa, in addition to his first book Antkind, here takes another writer’s original blueprint and adapts first-time novelist Iain Reid’s work, but he has fused what would seem unfilmable material into a pure Kaufman fantasia of ideas about reality, time, memories and the projection we put on ourselves and one another. Or not. This is a movie that can be looked at in many ways, a mind-bending exercise that likes to call itself a “metaphysical thriller.” Right there you know that while it might be for the Kaufman faithful to mull over and view endlessly for new meanings, it is not for the uninitiated into this talented pure original’s unmistakable ouerve.

Taken on its most basic level, if that could even be possible, this is a road-trip movie in which Jake (Jesse Plemons) and a Young Woman (that is how she is credited) played brilliantly by Jessie Buckley, so good in Wild Rose, are having a conversation on a very snowy drive as he takes the woman he has been dating for about two months to meet his parents at their farmhouse. The first act is that weirdly disconnected conversation they have that makes it seem more like an awkward first date than one between a couple who have been together several weeks. He asks her about poetry, talks movies and showtunes and generally seems kind of odd. She doesn’t seem to connect at all, and we constantly are exposed to her inner thoughts as they drive along, thoughts that seem to be felt or heard by him somehow. When she says to herself, “I’m thinking about ending things,” you aren’t at all sure what she means, but personally, I hoped it would be this relationship.

Once they get to the house, she meets his dog, sees his boyhood bedroom, gets weird vibes from the basement and meets his mother (Toni Collette) and father (David Thewlis). It seems sort of OK at first but quickly travels to Kaufman-land, where we aren’t quite sure which reality, or whose reality, we are in at any given moment. But the supporting turns by Collette and Thewlis allow them to run the age gamut as the movie begins really playing with time and doesn’t let up as the two-hour, 15-minute film meanders along.

The “meet the parents” bit is a centerpiece, but soon the pair are back on the road, including a stop for some ice cream at a roadside diner of sorts, where they order takeout items from the bizarre employees who offer ominous clues to where we may be headed. Actually, we are headed to Jake’s high school, and he takes off unannounced, leaving Buckley’s character stranded until she goes after him and finds herself wandering down the empty halls — empty that is except for an old janitor (Guy Boyd) mopping the floor. We have seen snippets of him before in the film, watching TV — or the couple? — from his home or at work cleaning a theater during rehearsals of a (long-ago?) high school production of Oklahoma! as an actor sings Rodgers and Hammerstein’s “Many a New Day.” That isn’t the last of Oklahoma!, because when the young woman reunites with Jake, identically dressed stand-ins enter the picture replacing Plemons and Buckley and take over the spotlight in the hallway by launching into a full-blooded version of the Dream Ballet from the R&H Broadway classic. Classical dancers Unity Phelan and Ryan Steele do a swell interpretation of the ballet, which has been choreographed nicely for the film by Peter Walker. What does it all mean? Up to us.

Eventually, stranger things happen, the janitor starts running naked around the place, and Jake, a whole lot older, sings “Lonely Room” from Oklahoma!’s first act. So things don’t really come into focus after that, and even the end credits are meant to strain the viewer as they aren’t much bigger than the last line on an eye chart.

So is this all a dream? That is what I thought watching it, not knowing initially it was based on a book. I would have guessed Kaufman dreamed the whole thing and somehow, pretty impressively, got it all on film. It made sense when I read the press notes and saw he referred to his attraction to doing it as the “dreaminess of the novel.” Makes sense. Nothing much else does, but why should it? So many of the images and the encounters the characters have with each other are indelibly stamped in my head. That’s an achievement right there. I will keep working on what lies beneath the surface.

The actors here could not be better, but Buckley really steals the show. She’s extraordinary. So is the snowbound cinematography of Lukasz Zal. Producers are Anthony Bregman, Stefanie Azpiazu, and Robert Salerno. It begins streaming September 4 on Netflix. Check out my video review with scenes from the film at the link above.

Do you plan to see I’m Thinking of Ending Things? Let us know what you think.