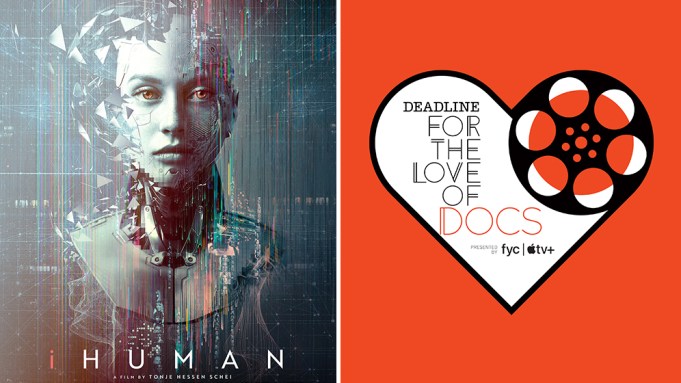 With her awards-contending documentary iHuman, director Tonje Hessen Schei offers a rare glimpse into the industry of artificial intelligence, examining the profound opportunities and challenges it brings, and the ways in which it will shape the world of tomorrow.

Billed as a “political thriller about artificial intelligence, power and social control”, the film reflects the director’s long-standing interest in technology. “I think that the relationship that we humans have to technology is extremely fascinating,” Hessen Schei said last night, on a For The Love Of Docs panel, “and just in my life, seeing how fast technology has developed, I think sparked my curiosity and fascination with technology.”

While the director has meditated on technology’s impact throughout her career, it was in 2014 that AI came into focus, as the subject that would consume the next five years of her life. At the time, she was working on Drone, a documentary about the covert CIA drone war in Pakistan, waged between 2004 and 2010. “I just kind of had a ‘Holy s**t’ moment…seeing how weapons were becoming more and more autonomous,” the director recalled. “Then…I realized that AI not only is changing modern warfare, but our very lives and our society, and definitely our future.”

Though Drone revealed one disturbing application of AI, the director initially planned to center iHuman on the positive potential of artificial intelligence—on the solutions it could bring to problems like climate change and disease. But in her time, embedded in the AI industry, her perspective on the subject changed. “I truly believe, and really hope that we get to see some of the possibilities of this technology come through,” she said. “But after countless AI conferences and so many interviews, I just started getting a really bad feeling in my stomach.”

What the director perceived was that “there’s so much fluff and hype around AI,” yet very few people are talking about the “real ethical consequences” associated with it. Certainly, the filmmaking process validated her belief in AI’s ability to solve some of the greatest problems facing humanity. But at the same time, this invisible empire has been, and can be used for much more malevolent purposes. Enabling an unprecedented degree of surveillance, AI also can be used to influence elections, to reinforce existing injustices and to perpetuate a polarized cultural climate. As iHuman explains, all of these factors can serve to perpetuate infinitely stable dictatorships. “So, that’s why I decided to make iHuman about the ethical challenges that we have to deal with,” Hessen Schei says.

In order to effectively communicate the complexities of artificial intelligence to audiences around the world, the director took a deep dive into the “nuts and bolts” of AI prior to filming, engaging in extensive research and courses in machine learning. Subsequently, she would sit down with many of the AI industry’s leading thinkers—“the very people on the front line of the AI revolution”—who offered their perspective on the stakes at hand.

As with her past projects, gaining the trust of documentary subjects was a primary challenge. “Especially when it comes to computer scientists that are working in really high-end AI labs, there’s…a lot of secrecy, and a lot of paranoia about what they can say,” Hessen Schei explained. “None of them use email anymore. Email is sort of from the past, in their world. So, having to figure out all the codes of how to reach them, when to reach them, and what kind of language to use, to set up times to meet, was definitely learning how to program, in some way.”

A secondary challenge, for the director, was figuring out how to visualize AI, as a character—one that is invisible, ever evolving, and constantly expanding in its powers. For assistance in bringing AI to life, she turned to Theodor Groeneboom, an award-winning visual effects artist who has worked on a variety of blockbusters, including Gravity, Rogue One and Doctor Strange. “Theodor grew up as a creative hacker,” the director said. “Since he was 14, he’s been figuring out ways to use the computer for art, in ways that it’s not supposed to be used. So, his experience in playing with inspiration from AI and machine learning, and the complexity around this technology, was super exciting.”

Reflecting back on the goals she set for herself with iHuman, Hessen Schei recalled her hopes to make a film about AI that would connect and resonate with young people. Thus far, in her native country, it seems like she’s accomplished just that. “We’ve had wonderful screenings here in the Norwegian school system. I think so far, around 15,000 teens have watched the film,” the director said, “and their engagement after the film gives me a lot of hope for the future.”

For more from our conversation with the director of iHuman, click on the video above.