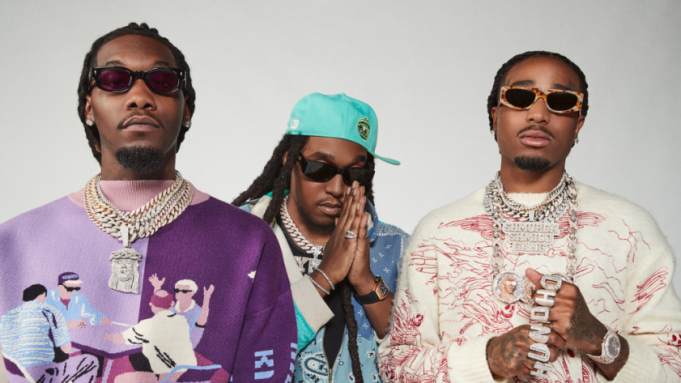 EXCLUSIVE: The term “bling” may have gone out of fashion, but wearing bling certainly hasn’t, among most of hip hop’s top artists.

In the YouTube Originals docuseries Ice Cold, hip hop stars catalogue some of the “ice” they own. French Montana, for instance, points to a ring on his left pinkie (“It’s like a million and a half”), and a couple of bracelets: “Six million, another two million.”

Compared to Montana, Quavo–a member of the hip hop trio Migos (along with Offset and Takeoff)–may appear surprisingly demure. He points to a bejeweled “Bustdown” Audemars Piguet watch on his wrist. Estimated value: a modest $300K.

Migos are among the executive producers of the series, directed by Karam Gill, which premieres July 8 on the Migos YouTube channel.

“It’s the history on jewels, the history on diamonds,” Quavo says of the series. Adds Offset, “[The] hard work, blood, sweat and tears it took to get it.”

In a statement, Gill went into further detail on Ice Cold, noting, “We all have our own ways of feeling and displaying success. This series explores that concept through the story of hip-hop jewelry. It’s a deeper look at the construct of ‘The American Dream’ and how hip-hop has redefined it through jewelry and creative expression.”

“My diamonds is pissy,” Migos rapped in their 2013 hit “Versace.” “[M]y swag is exquisite.” That same year, rapper Ace Hood released “Bugatti,” a song with the lyrics, “…I’m rich as a bitch/One hundred K I spent that on my wrist.”

Not every observer of hip hop is down with the ostentatious displays of consumption. Musician/author Questlove cited the “Bugatti” lyrics in a 2014 essay he wrote criticizing “outsize boasting” in the music of many hip hop artists and the distance they put between themselves and their fans when they rap about material goods of astronomical price.

“…[H]ip-hop has become complicit in the process by which winners are increasingly isolated from the populations they are supposed to inspire and engage…,” Questlove wrote. “This isn’t a black thing or even a hip-hop thing exclusively. American politics functions the same way. But it’s a significant turnaround and comedown for a music that was, only a little while back, devoted to reflecting the experience of real people and, through that reflection, challenging the power structure that produces inequality and disenfranchisement.”

Ice Cold takes a similarly penetrating view of the subject, but apparently from a different point of view than Questlove, using “the prism of hip-hop jewelry to explore deeper issues around racial inequity and the American Dream,” according to a press release. “The series dives into hip-hop’s ability to reimagine and transcend established notions of wealth, status, superiority and the sheer resilience of hip-hop culture.”

The exclusive clip above gives a taste for the series.