Continue to Deadline SKIP AD
You will be redirected back to your article in seconds
Skip to main content
March 12, 2020 6:28pm
27Comments 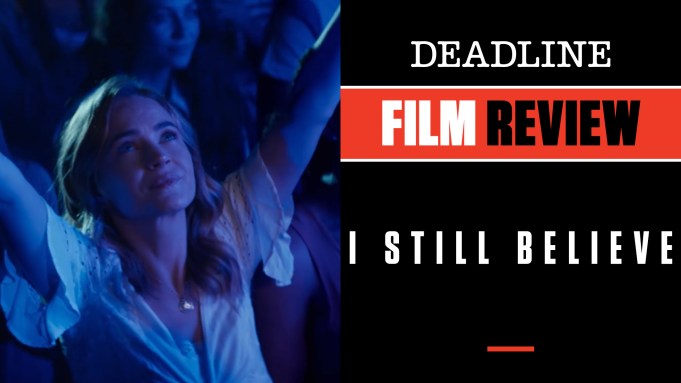 Coming off the major box office success of I Can Only Imagine, the 2018 faith-based smash based on a massive hit song, directors Andrew and Jon Erwin follow it up with another story titled after a single that also struck gold in the Christian music world.

I Still Believe is based on the first song Jeremy Camp recorded after the death of his young wife in February 2001. She died of ovarian cancer after having married the rising singer less than three months earlier. Telling the story of their whirlwind romance, her tragic illness and the faith it took to get through it, the Erwins have another surefire crowd-pleaser in this old-fashioned weepie, particularly for the target audience who flocks to this type of inspirational feature in which a strong belief in God is required for admission.

Fortunately, as in their earlier crossover hit, the directing team does not lay the Bible on so thick that it overwhelms the heart of a touching story of a young romance that takes a dark turn. Actually it has just as much, if not more, in common with inspiring 1970s films such as The Other Side of the Mountain, Ice Castles and particularly the king of them all, Love Story — which memorably started with the line, “What can you say about a 25-year-old girl who died?”

Charting the relationship in linear fashion of 23-year-old budding singer-songwriter Camp and the 21-year-old woman who would become his first wife, only to be felled by illness, the Erwins have made a film guaranteed to be good for the Kleenex business — in fact, at the film’s premiere, every audience member got some in advance. Considering the fact that the marketplace is not exactly loaded with this type of faith-based romantic drama right now, I Still Believe nicely hits the right chords without laying it all on too thick. It may not hit the heights of The Notebook, but it’ll do.

While not having the blessing of as powerful or huge a song like “I Can Only Imagine” to hang this all on, the film still gets the job done, thanks in particular to its two lead performances from Riverdale’s KJ Apa as Camp and Britt Robertson as Melissa. Apa impressively does all his own singing and guitar work here, showing off talents he doesn’t get to display as Archie in his CW series. He effectively steps into Camp’s shoes and hits the required high notes, musically and dramatically. Robertson, who also co-starred with Apa in A Dog’s Purpose, exhibits a nice chemistry with him and handles the emotional hurdles the role requires with some understated grace. As Camp’s father Gary Sinise is stoic and comforting, none more so than in a gut-wrenching scene when his son breaks down (cue the Kleenex for that one), As his mom, country singer Shania Twain has little to do but gets it done. Abigail Cowen is effective in a key scene toward the end.

Certainly I Still Believe doesn’t rewrite any of the rules of this genre, but it does ask the right questions of faith in light of unimaginable tragedy without trying to sugarcoat them. For those who truly want to still believe, it should be enough. Fans of Apa also ought to be happy. Cynics should quarantine themselves from this; it’s not for you.

Producers are Kevin Downes and Andrew Erwin. Jon Gunn joined Jon Erwin in writing the script. Lionsgate releases the film Friday. Check out my video review with scenes from the film at the link above.

Do you plan to see I Still Believe? Let us know what you think.