Continue to Deadline SKIP AD
You will be redirected back to your article in seconds
Skip to main content
February 17, 2021 12:01pm 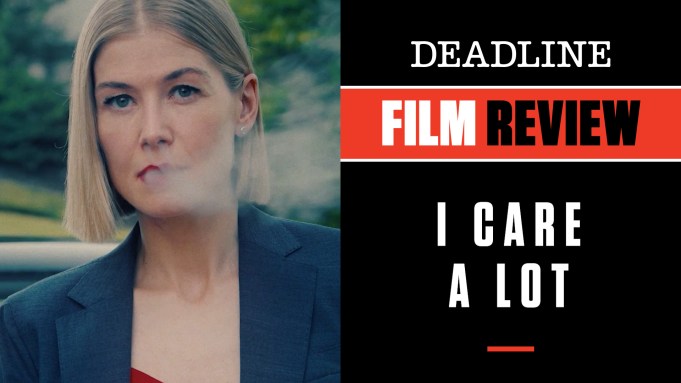 When writer-director J. Blakeson came up with the idea for I Care a Lot, he probably didn’t anticipate that upon its release it would become so ironically topical. But with the battle over Britney Spears and her conservatorship in the news again this week, as well as almost a yearlong focus on the condition of nursing and retirement homes during the pandemic, what is really a devilishly smart black comedy also carries with it some food for thought in themes that resonate right at this moment.

Rosamund Pike, deservedly Golden Globe-nominated for her performance, is icily devious as Marla Grayson, a woman who has turned her business as a “legal guardian” into a successful scheme to bilk seniors out of their life savings as she gains control of their lives and sticks them in homes to be quickly forgotten. Joined by Fran (Eiza González), her partner in crime as well as her lover, it becomes a lucrative business — one they can pull off in their sleep, it seems, until unwittingly meeting an unlikely match in kindly grandmother Jennifer Peterson (Dianne Wiest). Marla has no idea what is about to happen when she comes knocking on the door of this seemingly very together and independent woman, but as she manages to become her conservator, take her from a comfortable suburban home and stick her in a facility where she is literally and figuratively silenced, it seems like Jennifer is just another victim of Marla’s cunning ways. Surprise. Surprise. Jennifer is actually more than she ever bargained for with family connections that are about to challenge Marla’s livelihood — and life.

To reveal the twists and turns the story takes from there would be critical malpractice, so I won’t. Suffice to say that when gangster Roman Lunyou (Peter Dinklage) and his gang come into the picture, get ready for a roller-coaster ride that makes Game of Thrones look like child’s play by comparison.

This darkly comedic crime thriller usurps its genre to successfully set a tricky tone that never falters, especially when it easily could have gone too far over the top to be credible. Working with a game cast, Blakeson lets this den of thieves loose on delicious complex plotting and a tangled web of deceit involving control, authority, profit, bureaucracy, and pure naked ambition that all collide in wittily amusing ways to make this Netflix acquisition out of the Toronto Film Festival must-see entertainment.

Pike deserves a lot of credit for making Marla someone we can actually weirdly root for in odd ways, despite having disgust at her methods of taking the gold out of the golden years of her marks. She is an actor of such skill as to make this master manipulator fully three dimensional as she embarks on the ultimate cat-and-mouse game. Dinklage plays it big, but he’s no cartoon, and he seems to be relishing the opportunity to outwit his opponents in any way he can. The supporting cast couldn’t be better: Two-time Oscar winner Wiest skillfully navigates the demands of a role that seems stereotyped at first, and is anything but that, and Gonzalez is excellent, as are Isiah Whitlock Jr. as Judge Lomax and a never-better Chris Messina very funny as a cagey lawyer.

With elder care and what goes on in nursing homes top of mind these days, I Care a Lot actually has gravitas in shining a light on this industry no matter how extreme and satirical its methods may be. It is actually credible that variations of what happens to Jennifer Peterson certainly happen in real life, and can give pause about the way we may dispose of our most senior family members, left alone in circumstances out of their control. This movie may be a scintillating “game of rats” at heart, but its timing could not be better.

Easily one of the best attractions you will find on Netflix this awards season, I Care a Lot begins streaming Friday. Producers are Teddy Schwarzman, Michael Heimler, Ben Stillman and Blakeson.

Check out my video review above with scenes from the film. Do you plan to see I Care a Lot? Let us know what you think.